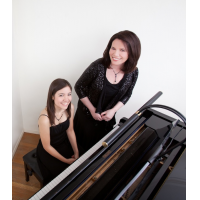 Lyricist/jazz vocalist Lorraine Feather was born in New York, the daughter of jazz writer Leonard Feather and goddaughter of Billie Holiday. Lorraine started her career as an actress in New York, transitioned into singing, and realized that lyric writing was her greatest gift. She has had songs recorded by numerous artists including Patti Austin, Diane Schuur and Cleo Laine, and has earned seven Emmy nominations as a lyricist. Since 2001 she has focused on recording solo jazz albums, first featuring the music of Fats Waller and Duke Ellington with her added words, then all-original material written with living composer collaborators. Lorraine’s Ages release was a 2011 Grammy nominee for Best Jazz Vocal Album; her newest solo CD, Tales of the Unusual, was a 2013 Grammy nominee in the Best Instrumental Arrangement accompanying Vocalist(s) category. DownBeat has called Lorraine “enchanting and exceptional” and All Music Guide has described her as “one of the most creative lyricists of her generation.”

St. Louis-born Stephanie Trick is a traditional jazz pianist and recording artist who “has come to practically dominate the stride piano field” (Jack Rummel, Ragtime Music Reviews). Louis Mazetier, a noted interpreter of this physically and technically demanding style of jazz piano from the twenties and thirties, writes in the Bulletin of the Hot Club of France that she has “won the esteem of specialists in the genre with wonderful interpretations of stride classics, James P. Johnson, Fats Waller, and Don Lambert (which she learned by ear).” He continues, “She plays these pieces with a punch that is matched by her precise interpretation.” A classically trained pianist, Stephanie began playing piano at the age of five. In high school, she discovered her first true passion – stride piano. She was awarded the New Talent Prize by the Hot Club of France in 2011.

In May 2010, Lorraine discovered Stephanie through the recommendation of a musician fan who had become aware of the young pianist’s online performance videos. The two became mutual long-distance fans, arranged a meeting in California to try out some material together, and decided to create Nouveau Stride, meeting over the course of two years whenever their schedules allowed going through material that Lorraine might lyricize. The result is Fourteen, which includes music by James P. Johnson, Fats Waller, Duke Ellington, and living composers in the stride/ragtime genre. Jazz Times calls the reinvented classics “deliciously clever … wonderfully witty,” and the San Diego Reader praised Nouveau Stride’s recent multi-media show at the San Diego Jazz Festival as “a contemporary ‘duo-summit’ … a glorious tour-de-force.”

The Metropolitan Room was named the #1 jazz/cabaret club by New York Magazine.