SOURCE: ALL ABOUT JAZZ PUBLICITY
March 29, 2010
Sign in to view read count 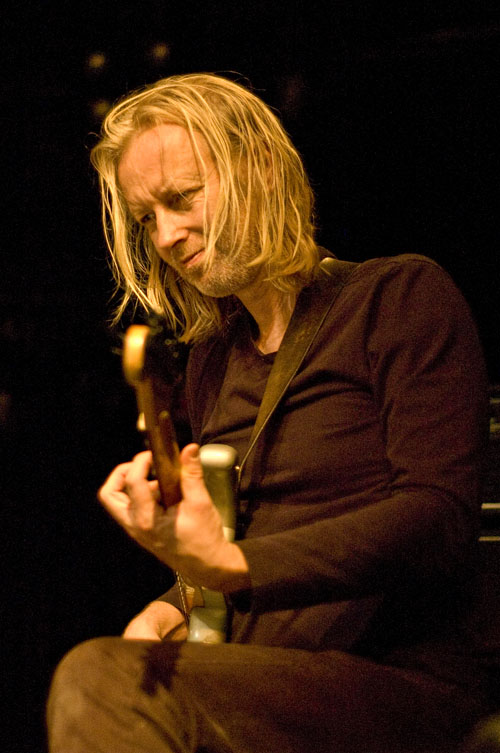 slideshow
In a time when the interactive video game Guitar Hero is selling in the millions, Eivind Aarset is, in many ways, the Guitar Anti-Hero. Despite making music that could easily lend itself to the kind of guitar pyrotechnics that are so often the litmus test of a good player, Aarset's emphasis is on texture, on melody, on groove, and on a kind of collective improvisation that's been reshaping and redefining what jazz can be since he released his first album as a leader, Electronique Noire (Jazzland) in 1998. Live Extracts (Jazzland, 2010), featuring various incarnations of his expanded Sonic Codex Orchestra, is culled from a number of live dates in Europe, largely revisiting earlier material from albums including Connected (Jazzland, 2004) and Sonic Codex (Jazzland, 2007), but with paradoxically even greater energy and subtlety; music that moves from a whisper to a roar in a matter of seconds.

AAJ Managing Editor John Kelman spoke to Aarset recently, about his role in the important second wave of Norwegian music that began in 1997 with the emergence of trumpeter Nils Petter Molvaer, Supersilent and keyboardist Bugge Wesseltoft; his own important debut as a leader, Electronique Noire; the creation of Live Extracts; and what the near future holds for this remarkable guitarist. Read about all of this and more in John's in-depth interview, Eivind Aarset: Guitar Anti-Hero, published today at AAJ.

To celebrate the recent release of Live Extracts, AAJ is providing even more coverage:

AAJ is committed to providing the most extensive coverage surrounding new releases anywhere, so be sure to check out all the buzz surrounding Eivind Aarset and Live Extracts at AAJ today!