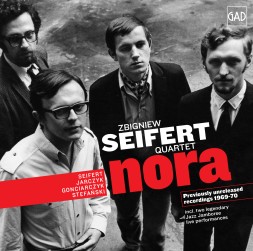 slideshow
We are making up for the mistakes committed by the Polish music industry decades ago. The hitherto unpublished recordings of Zbigniew Seifert Quartet (1969-70) are finally released on CD! The ensemble debuted in 1965 and disbanded in 1970, shortly after their appearance at the Jazz Jamboree festival. No album by the band was ever released. It is only now, forty years after the Quartet's break-up, that their recordings become available to the general public. The CD “Nora" is due for release in May 2010.

The CD features a number of live recordings from the band's festival appearances at Jazz nad Odr (1969) and Jazz Jamboree (1969-70). Standards like “East of the Sun" and “Blue in Green" come back to back with intriguing compositions such as “Meandry" (Meanders) and “Ten niezastpiony" (The Indispensable One). The players rank among the cream of the crop in the world of Polish jazz. Janusz Stefaski (dr) has appeared in numerous projects both in Poland and abroad. The pianist Jan Jarczyk has come to prominence with several marvelous compositions written for Studio Jazzowe Polskiego Radia (a jazz band led by Jan “Ptaszyn" Wrblewski). Among the many collaborations of Jan Gonciarczyk (b) are his spells in the Henryk Saboszowski Quartet as well as the group Anawa. And finally the band's leader, Zbigniew Seifert, still considered one of the most prominent violinists in the history of Polish jazz, whose manner of playing the fiddle resembled the way Coltrane handled his saxophone. Yet Seifert was also a great saxophonist himself, and the new CD “Nora" fully corroborates this statement.

All the tracks have been carefully remastered. The CD comes with a lavish booklet featuring a lengthy essay on the Quartet as well as some rare photographs of the band. Limited deluxe edition (111 hand-numbered copies) features a set of postcards and exclusive reprints of original scores.

Check out an exclusive audio sample of “East of the Sun"