SOURCE: JEAN-MICHEL TENGANG
May 24, 2018
Sign in to view read count 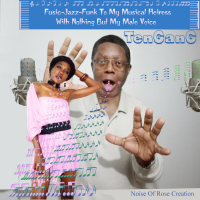 slideshow
TenGanG is a Cameroonian artist (singer, guitarist, songwriter) living in France. He is inspired by all the music of the world, but he makes albums in distinct styles, either based on progressive rock, or based on Jazz, which is very rare, if not unique.

TenGanG's previous album Symphony Of Noise In French Troubled Waters with guest singers, was a prog rock album. With his new album Fusic-Jazz-Funk To My Musical Heiress With Nothing But My Male Voice, he changes directions, this time fusing jazz and funk and other influences, and, apart from some guitar work, all the other sounds are performed by TenGanG a la Bobby McFerrin.

Cameroonian singer Eleo W.E.B is present on the cover and in the title of the album, but does not participate on the album. This honor is given to her because she is trained by TenGanG who considers her as his musical heir, it's a transmission of relay. Her own A cappella jazz album is due out soon, followed by an album of fusic-progressive-rock-funk. One of her talents is the mastery of Indian scat and Tibetan and Sufi voices.

1) And She Became A Funky Warrior
2) Yesterday, Da Da Da, She Was So Sweet
3) Her 20th Initiative, From Worry To A Funky Happiness
4) My Android Voices and The Cries Of My Guitar
5) You're Really Important To Me, Even If You Don't Believe It
6) Ultimatum Dance
7) Dance Over My Sadness
8) Her War Dance Against Panthers And Leeches
9) Can She See Herself Starry Today
10) Her 7th Initiative
11) A Crazy Speedy Day
12) The Day She Touched The Sky