Paris II is a celebration of, as well as a validation to, a time and love that is gone; as well as the end, it is also the first chapter.
—Neni Carolina Chacin 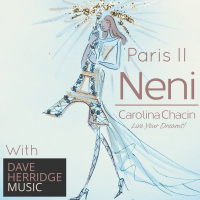 Neni Carolina Chacin born in Venezuela and raised between USA and UK but now living in Paris, France, has earned global following for blending gospel, jazz and pop with a true inner intention and sensibility to help other live their dreams.

Paris II is Neni’s second Jazz studio album from Paris and is her most intimate to date. Released through online digital distribution company Distrokid, the album contains a beautiful and honest collection of songs from the 40s, 50s and 60s straight from the heart as she discovered them with Dave Herridge, a British Jazz legendary pianist in Paris.

Never afraid to sing about difficult situations, Paris II came about after meeting Dave Herridge in the summer of 2018 in Paris and dealing with her heartbreak from her long time relationship in France. Her optimistic and appreciative outlook on life has managed to create an empowering and uplifting album full of promise.

Recorded with her home studio tools with her software engineering skills and studio recording experience, she captured Dave Herridge on piano, bass, strings, vibraphone and a special vocals duet (Passing Strangers). The style ranges from jazz to pop with a hint of gospel and classical music as Dave’s majestic piano playing paints the harmony and what critics say is “riveting and inspiring”.

“Recording these songs was a way of coping and transforming my pain into love, joy and light. All the songs are intense, but it’s not all a sad story. Love at first sight? yes but the love and pain of Romeo and Juliet moments exist too. I know how lucky I am that to have the chance to live that love. Even just once is amazing”—Neni Carolina Chacin

Known for her Gospel performing and touring all around the world with multiple Gospel Choirs and collaborations with Venezuelan Tenor Pierino Priolo, Boston Pops Gospel choir and orchestra, and her solo work in Boston with her Vida Vibrante Jazz band and Spanish worship leader in Boston’s and Maracaibo’s Catholic churches, Neni Carolina Chacin has been one of Venezuela’s most accomplished respected jazz/gospel soloist in Boston since her arrival in 1995 and her jazz debut album in 2000. Her studio voice recording goes back to 1990 when she was featured in the theme song (Estrella) and soundtrack of the first ever movie produced in her birth town Maracaibo called Joligud.

Neni has released two jazz studio albums, one meditation album, one live gospel albums a Spanish Pop EP since she arrived in Paris in 2015 and has been featured in many gospel albums before such as GMWA Mass choir and independence award winning album Praise Collective by One Human Family Choir. She is also a published author with three books currently in preorder on Amazon and her book written in Paris in 2015 for healthy cooking with stories after surviving cancer in 2004 and changing her lifestyle.

She has sang and toured in 17 Countries. Perhaps no one in the Jazz music scene has expressed in singing the experience of growing up in the chaos of Venezuela, migrating to USA in the 90s, surviving oral cancer and the pressure of the software engineering corporate world of Boston, becoming a triathlete after 40 years old and moving to France and launch her worldwide life and business coaching career.

The new album is more than a postcard from the other side of the globe, is Neni’s vocal work throughout the years.