Highly recommended, especially for those who don't know his work, you're in for a wonderful, perhaps life changing, surprise. —iTunes Customer Review 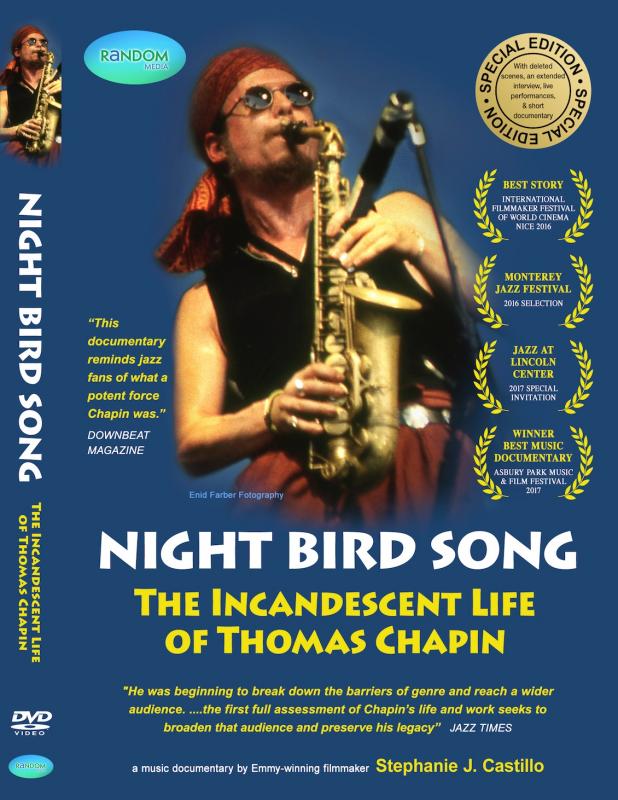 A celebrated film in theatrical appearances at the prestigious Jazz at Lincoln Center and the Monterey Jazz Festival, and winner of awards including “Best Story Award" from the Nice (France) Film Festival (2016) and “Best Music Documentary" (2016 Asbury Park Music and Film Festival), the film is directed by EMMY Award-winner and former journalist Stephanie J. Castillo, who is Brooklyn-based. This is her 10th documentary film.

The film presents an intimate and engaging, music-filled showcase of jazz great Thomas Chapin whose life was tragically cut short by Leukemia at age 40 in 1998.

A virtuoso who emerged in the New York City’s downtown scene in the '80s and '90s, he was schooled by jazz greats, including Lionel Hampton and Jackie McLean. Night Bird Song showcases Chapin’s brilliant compositions and work in a broad breath of genres that left music critics and fellow musicians alike amazed at his ability to bend the genre of jazz with innovative originality. Included in the 96-minute film is the Thomas Chapin Trio’s acclaimed performance at the 1995 JVC Newport Jazz Festival.

Online streaming platforms, such as iTunes and Amazon Prime, now carry Night Bird Song. The film can be downloaded to own or to rent. iTunes is making Night Bird Song available to view here.

Debuting on DVD in a spectacular 2-Disc Special Edition. The release is a 2-disc set with six hours of content including:

The DVD is available for purchase and for $1 shipping at moviezyng.com.