SOURCE: ALL ABOUT JAZZ PUBLICITY
May 12, 2009
Sign in to view read count 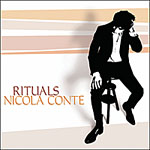 2008 is the year of “Rituals," which confirms the multifaceted talent of the artist and instrumentalist from Bari. Recorded between the end of 2005 and the October of 2007, also this work first of all develops around the historical faithful team which follows the artist in the live shows. Here we find again Pietro Lussu, Pietro Ciancaglini, Fabrizio Bosso, Lorenzo Tucci and Daniele Scannapieco, with whom Nicola elaborated lots of tracks contained in the album. Afterwards the band has been flanked the other friends of theirs, Gianluca Petrella, Gaetano Partipilo and Till Bronner, who also attended the previous Other Directions.

Also this album grew up through several production phases, and shows a sharper appearance, thanks above all to the love for both the overseas and European jazz.

The Afro kind of jazz is celebrated with the participation of Greg Osby and Michael Pinto. The first one is a talented alto sax musician and one of the gurus in the New York jazz scene, resident in the “roaster” of the Blue Note for twenty years; the second one instead is a vibraphone musician born in New Jersey, a kind of rising star who grew up at the Berklee School of Music. As opposed to the overseas scene, the melodies and the feelings typical of the European school are demonstrated strongly through the energy and taste typically expressed in the north of Europe, particularly in Scandinavia: Timo Lassy and Teppo Maikinen, already famous in their home country, Finland, and highly considered in Italy because of their participation on the Five Corners Quintet's album, respectively as a saxophonist and a drummer.

The utilization of the voices gives us great artistic importance and depth. These voices belong to Chiara Civello and Alice Ricciardi and express all the warmth and intensity typically Italian. The first one, born in Rome, achieved success in the States, where she was already living and studying singing. Some years ago she made her worldwide debut with Verve Records, with the intuition of Burt Bacharach who produced some tracks of her first album.The other singer, born and living in Milan, is the new Italian Jazz singer at Blue Note. We are in front of two emotional women with great vocalisms. They show a different appeal but perfectly malleable to the melodic tessitura of the songs.A black kind of vocalism is expressed differently by Kim Sanders, a sophisticated Berliner soul singer, who already had the chance to perform during the various Jazz Combo live shows, and which represents a connection with the Afro American culture. For the first time in a Nicola Conte's album we find some male voices, as well as those of the newer and original ones of the international market. Josè James, a singer from New York who has been acknowledged by the European media thanks to the intuition of Gilles Peterson. The famous DJ was so amazed during a concert of the singer while he was performing “Equinox" by John Coltrane, that he decided to produce for him an entire album. Josè James takes care of the great singer's past tradition, those big names like Joe Williams, Nat King Cole and Mark Murphy, but using a timbre similar to the one typical of Andy Bey's voice of the first years.

Another fascinating voice is Philippe Weiss' one, who gave us a memorable performance in “Caravan," one of the most famous Duke Ellington's pieces which, together with “Macedonia" by Dusko Gojkovic represents the unique unoriginal compositions of this work.

Rituals signals a switch in Nicola Conte's artistic career, further developed thanks to his effort in the creation of the songs and lyrics of the record. Just as it happened in the previous album, also here we find references to the literary culture dear to Nicola which helped him find inspiration during the writing phase.

Among the poet's lectures which influenced the lyrics we find those of Dylan Thomas and the American Langstone Hughes.There are some pieces in the album which were inspired more than the others by the literature of these two writers. The first one is “Like Heavens In The Wind," whose lyrics were performed by Jose James. His words are accompanied by the wind instruments with Till Bronner and Sandro Deidda, a valued musician from Campania who is present in seven pieces of the album.

The other two songs in question are “I See All Shades Of You," with Alice Ricciardi's classical interpretation, and “The Nubian Queens," where the drumming by the Finn Teppo Maikinen leaves immediately its mark. The solos by Fabrizio Bosso and Timo Lassy seems to be unbreakable till the end of the song.

Another innovation immediately perceptible listening to Rituals is the compositive form, the colours, the feelings and the romantic mood which are expressed through the blue notes of the guitar played by Nicola Conte (here as an instrumentalist). Among the most famous great historical instrumentalists of the past Nicola Conte is influenced by Barney Kessel, Jim Hall, Wes Montgomery, Grant Green, Pat Martino, Gabor Szabo, Kenny Burrell. Great artistic conceptions which still promise us future new productions of this great Italian artist.

Music and Lyrics written by Nicola Conte
Except tracks: 05 lyrics by Jose James, 08 music by Dusko Gojkovic, 09 music by Sandro Deidda and Nicola Conte and 12 music by J. Tizol.


Nicola Conte fully impersonates the character of the “new musician" which embraces also those cultures which have been developing in the last twenty years: the experiences of the DJ's and the aesthetics in the electronic music. We found ourselves in front of new horizons which are sometimes distant from those most traditional ones the composers and interpreters belong to, but which fulfil their identity.

This being both a producer and an artist, a director and an actor, a purchaser and an artisan, is a “Renaissance" way of being a musician: as if he were in an art shop, where he can create freely and give birth to another style. Listening to Rituals you feel Conte's personality through the words of his lyrics, which have been refined with care and passion before having been recorded; through the voices called to sing, who have been chosen depending on the similarities with the pieces they should perform; through the rooms given to the musicians, who are among the most talented cultured Italian musicians. We're talking about a project, not only about a record.

During an interview I was asked for my personal opinion about Nicola Conte. I answered instinctively: “a gentleman". This word of other times encloses maybe an imaginary which well represents both Nicola's music and personality: the measure and the consciousness which contribute to the creation of a project, the seriousness and the care which pursue a shape. That seriousness sometimes digresses in the formalism, but it more often demonstrates a great love for music, of a non transitory essence owned by such big cultures like jazz.

Rituals confirms and develops these fundamentals: Nicola Conte uses an international language to communicate a kind of greatness the world is going to lose and Italy is historically an expert in. I'm talking about the “Grace". --Alessio Bertallot, Radio DJ (Italy)