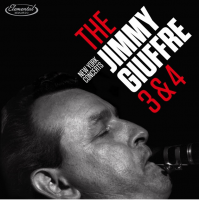 The years between the release of Jimmy Giuffre‘s ground-breaking 1962 albumFree Fall and his return to the studio in 1971 with Night Dance have become known as the legendary clarinetist and saxophonist’s “lost decade,” a key period in his and jazz’s musical evolution which sadly went undocumented. The two-disc set is available June 10th, 2014 on Elemental Music, distributed in the U.S. by INgrooves/Universal Music Distribution.

The release of the two remarkable 1965 performances on New York Concerts, unheard for nearly 50 years, offer a rare and revelatory glimpse into that discographical dark period. This captivating two-disc set, would be valuable solely for the brilliant music, which finds Giuffre leading otherwise undocumented trio and quartet line-ups that advance his experiments in counterpoint and abstraction from the chamber-like Free Fall into even more adventurous avant-garde territory. But it also offers much-needed insight into one of jazz’s most innovative thinkers at a key moment in his development.

These recordings are the latest treasures to be unearthed from the seemingly inexhaustible troves of producer/engineer George Klabin, who in the last few years has also released essential “lost” recordings on his Resonance Records imprint by Bill Evans (Live at Art D’Lugoff’s Top of the Village Gate) and the forthcoming Charles Lloyd (Manhattan Stories). Additionally Feldman ushered Wes Montgomery’s newly acclaimed Echoes of Indiana Avenue through Resonance’s auspices.

The Jimmy Giuffre 3 & 4‘s New York Concerts was brought to light through the passion and dedication of Klabin’s partner in these releases, producer Zev Feldman, who brought the tapes to Barcelona-based Distrijazz founder Jordi Soley. Sharing a similar enthusiasm for the music, Feldman and Soley co-founded Elemental Music label as a home for Feldman to release more catalog discoveries, unreleased tapes or reissues of out of print records from bygone labels.

“I was really taken with this music when I heard it,” says Feldman, who discovered the tapes in July 2012 after working on the Montgomery and Evans recordings and asking Klabin what else might be hiding in his archives. “This was obviously the direction in which Jimmy was going with his music, but it was unlike anything I’d ever heard. It just blew me away.

The first disc was recorded in September 1965 at Judson Hall during Charlotte Moorman’s New York Festival of The Avant-Garde, produced by saxophonist and jazz critic Don Heckman, on a triple bill with bands led by Heckman and Charles Lloyd. The concert marks the only performance by this particular trio with bassist Richard Davis and drummer Joe Chambers, who when interviewed for the CD booklet, had no recollection of the date even happening.

Disc two travels slightly back in time to May 1965, with a performance in an empty Wollman Auditorium on the campus of Columbia University, then 19-year-old Columbia student Klabin had recently been appointed head of the jazz department at WKCR-FM, the university’s radio station, and wanted to present original recordings as part of his show. He invited Giuffre with that goal in mind, and recorded his quartet – with Chambers, pianist Don Friedman, and bassist Barre Phillips.

Both of these recordings were made expressly for Klabin’s radio show, aired once, and then filed away for nearly five decades. The pristine sound quality reveals Klabin’s prodigious talents at an early age, close-miking each musician and mixing live to a Crown 2-track tape recorder. “It’s George Klabin’s world of sound,” says Feldman with audible admiration. The release was mixed, mastered, and restored by Klabin & Fran Gala at the Resonance Records Studios in Beverly Hills.

The tapes’ welcome resurrection is accompanied by attractive and exhaustive packaging, with liner notes by writers Philippe Carles and Bob Blumenthal (who interviewed Friedman, Phillips, and Chambers); background by Feldman and Klabin; and reminiscences by Giuffre’s longtime collaborators Paul Bley, Steve Swallow, and the late Jim Hall. Giuffre’s widow Juanita Giuffre also offers her thoughts and support, which was integral for Feldman to move ahead with the project.

“Without Juanita’s support and blessing we would not have done this project,” Feldman says. “She was very gracious to allow us to do this.” Unlike other historical release labels, Feldman made sure everything was above board regarding copyright and musician fees. All sidemen were paid for their work and royalties arranged with the Giuffre estate.

These two sessions come three years after the release of Free Fall, Giuffre’s pioneering trio recording with Paul Bley and Steve Swallow that ventured into unexplored territory, expanding the boundaries of jazz but resulting in the ahead-of-its-time trio being dropped from Columbia Records due to poor sales numbers. The trio disbanded soon thereafter, and in early 1965 Giuffre played the Olympia Theatre in Paris in a new trio with Phillips and Friedman to a hostile reception (Carles was present at said concert and writes about it in his notes). The New York Concerts represent a few milestones beyond the staggeringly inventive sounds being made: they mark Giuffre’s first bands with a drummer in many years and a return to showcasing the tenor saxophone after a long period of focusing solely on the clarinet.

Most importantly, this release provides integral context for the genius of Jimmy Giuffre, which Feldman hopes will spur increased attention for the oft-overlooked innovator. “I hope that this serves as the ignition for dialogue about who he was and why he should be remembered. I hope that people enjoy the music. I hope that we can learn from it. And I hope we keep the candle burning for Jimmy Giuffre and that he would be proud of what we’re doing here.”