Stan’s Hat Flapping In The Wind presents new work from one of the jazz avant-garde’s most essential individuals, presented in one of the most traditional of forms: voice & piano duets. 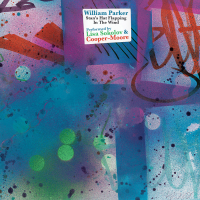 slideshow
On April 1, 2016, a new album of William Parker's luminous compositions will be released on his own Centering Records imprint (distributed via AUM Fidelity). Stan’s Hat Flapping In The Wind presents new work from one of the jazz avant-garde’s most essential individuals, presented in one of the most traditional of forms: voice & piano duets; by fully illuminated masters of their instruments. 19 new songs composed by William Parker, and performed by Lisa Sokolov & Cooper-Moore. Parker is—among his many great talents—a master of evocative song-craft, as readily evidenced on Corn Meal Dance, and the very recently released Great Spirit, by his Raining On The Moon ensemble. The compositions and performances presented here are filled with devotion to compassion for all life. They touch on the possibility of peace and truth prevailing in the present.

Stan’s Hat Flapping In The Wind is also the name of a musical that William Parker has been writing since 1994. To date he has composed over sixty songs for the production. In this musical, the principal characters—through tribulations and exposure to the magic of all life around them—begin to learn the art of living and the systems of sacred music. On this new studio recording, 19 of these songs are presented; the longest being 5 minutes, the shortest is 22 seconds. All of the songs are connected in that they all reflect on the mysteries of death and life. And, many of Parker’s touchstone subject matters abound: compassion for all living things, the magic of sound, the revolutionary nature of flowers, and deeply affecting dedications and invocations to enlightened spirits who have departed.

Lisa Sokolov is a jazz vocalist, improviser and composer known for her pioneering range of tone, timbre and expression. Parker has worked with her for over 35 years in many situations. As he writes in the liner notes to this release, “she is a master of music healing, interpretation and vocal creativity. I don’t know of any other singer who puts as much love and dedication into singing.” One of her own releases, Presence, received a 5-Star “Masterpiece” review in DownBeat and their January 2010 issue cited the album as one of the Best CDs of the Decade. Sokolov is currently a full arts professor at the Tisch School of the Arts at NYU, and is recognized in the music therapy world as an innovator in the applications of the voice to human potential.

Cooper-Moore is another deservingly heralded great in the realm of avant-garde jazz, though he has an incredibly rich history in all manner of performance. He, too, has worked with Parker for many decades, including within his free-jazz supergroup, In Order To Survive. He was also fully featured on Parker’s recent 3CD box set, For Those Who Are, Still. A multi-instrumentalist, composer, storyteller, instrument-builder and educator living in East Harlem, New York City, his approach to music goes beyond simple categorization. Though what he is working on now is informed by Creative Improvised Music and the jazz avant-garde, his ears are rooted in the Gospel, Blues and Bluegrass traditions from where he came, rural segregated Virginia. As Parker writes, “Cooper–Moore is always a great addition to any musical situation he is associated with, and has a huge musical palate of sounds with which he paints both small and large masterpieces. He is a prolific composer, improviser, and builder of instruments, as well as an inventor, cook, and devoted family person who continues to find new ways to enter into the tone world. He is one those rare individuals who has had first-hand experience with the essential magic that circles divine music.”