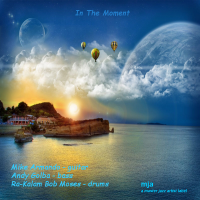 Group: In The Moment

A music creation that was recorded, In The Moment no charts, just pure creation of music from within bringing it to you. This track from the CD In The Moment is a combination of drum, guitar and bass that takes you on a journey to another land and era. Very funky like the title says. We have the great Ra-Kalam Bob Moses on the drums, a drummer that is known all over the world for his great drumming and music creations, Mike Armando on guitar, and Andy Golba on the bass.

Bob Moses has composed, arranged and produced over ten albums which have been hailed by critics worldwide. The albums Bittersuite in the Ozone, Time Stood Still and Love Everlasting (the latter recorded with guitar genius Tisziji Munoz) all received five stars in Downbeat.

Bob conducts workshops in both Europe and the U.S. and is currently an honors jazz department professor at one of the world's most prestigious music institutions, the New England Conservatory of Music.

“It's always good to speak about a musician such as Bob Moses who has so much creativity, lightness and energy. He is without a doubt one of the greatest drummers in the world." (Hermeto Pascoal)

“Bob Moses has an inspirational, one world approach to the music we play called jazz… he is a learned, erudite musician who has lots of fun on his many instruments. He is circumspect. He listens to the world around him and recreates it in a world of music, made in America, a national treasure." (Abbey Lincoln)

“If you have witnessed his performances or his band leading you have been blessed." (Billy Martin)

“As a personal friend and musical peer, I've collaborated with Bob and listened to him perform with some of the greatest names in Jazz. I feel that Moses is a fresh innovative artist who's talent deserves much wider exposure and recognition on the national and international creative music scene." (Jack DeJohnette)

“He was my first mentor... Moses is a rarity in this period; a true individualist, uncompromising, far reaching in his concepts and in all ways a true artistic person." (David Liebman)

“I am very grateful that Bob Moses landed at this place and time to grace our world with his openness, ingenuity, power, beauty, wit and immense creativity. His gifts to music are many. He inspired me when I was just starting to write and he continues to inspire me now. I'll always be anxious to hear where he takes us next." (Maria Schneider)

“Bob Moses' playing is like the elements. Like the air he is everywhere and nowhere. He plays everything and nothing." (Thomas Hebb)

Mike Armando was the guitarist for the late Screamin Jay Hawkins for three years while on tour. One of Mike's recording's," Half Stepin" on the mja Record label, a jazz/blues recording was rated one of the top ten records on radio play list in Bill Board Magazine. Mike has recorded with drumming great Ra-kalam Bob Moses. He has performed on radio and tv stations across the country. WOWI Radio music director Larry Dinger, Norfolk, Va. held many events at the station were Mike performed live. Mike has performed live events at WPKN, Jazz Advantures with radio host Phil Bowler in Bridgeport, CT. Mike Armando recordings on the mja Record label have been played throughout the USA and in Europe.

Guitarist, Mike Armando, a relatively young man, has paid his dues several times over. And you can hear it in his playing. My one time contemporary, Charlie Bird Parker once said, “You can’t play it if you haven’t lived it.” When you listen to Mike, you’ll will know from the very first note that he lived what he plays. There’s a seasoned unfiltered quality in his phrasing that awakens our ears to his affinity for the real deal form of jazz. With Mike, its all about feeling, just as it was with all of the great players of the past, and the few greats who are on the scene today. The sounds Mike has taken in and absorbed through the years didn’t come from any music school class, but straight from his life’s experiences, and from hanging around the great jazz clubs in New York City; and being able to see some of the greats perform up close and personal. Mike has a way of drawing his listeners in and making them a personal part of what he and the group are playing. - written by Artt Frank, long time drummer of Chet Baker.

Mike Armando has produced 13 CDs on the mja label with such artists as Grammy award winner Fred Lipsius, from Blood Sweet & Tears, Nancy Monroe, David Allan Gross, Chris Clark. Pat Morrissey, Artt Frank. One of the tracks from Fred Lipsius, mja release “Better Believe It" CD was released and distributed throughout the world on MCA Records. mja recording artist, Artt Frank who was the drummer for the late great Chet Baker was inducted into the Oklahama Jazz Hall of Fame on November 16, 2010. Mike Armando was the producer for all three of Artt's CD's. Mike has worked with other great musician's in his recording and musical career with the likes of Eddie Gomez, Marcus McLaurine, Michael Cochrane, Mike Stern & Bob Moses who recorded on the mja release with David Alan Gross “The Final Answer to Everything".

Andy Golba, is no slouch when it comes to laying down a solid bass line. Andy Golba has a style that is his own. He knows how to lay down a bass line for the rest of the group to play off of. His sense and use of time and rhythm is most notable, and he swings hard and holds it all together. Andy is a bass soloist also. He combines many years of playing experience into his solos. He has played many a jazz club in NYC and recorded with drumming great Ra-kalam Bob Moses.