Each of the tunes on 'Rumbler' has a very distinct personality. I’m really looking forward to seeing what directions they take when we stretch out and explore them in concert. 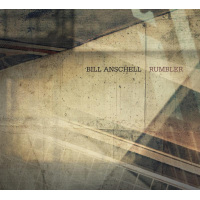 slideshow
One of the most valuable players in Seattle’s thriving jazz scene, pianist Bill Anschell is a prolific composer and adept arranger who’s explored those aspects of his craft since debuting on disc 20 years ago. His new Origin Records CD, Rumbler, which will be released January 20, is Anschell’s ninth album as a leader and his first full ensemble jazz recording in a decade. Throughout the recording, Anschell embraces odd meters, shifting tonalities, and other striking effects.

“I’ve written enough conventional tunes,” he says. “I don’t need to do that anymore. I’m more interested in going beyond the 32-bar form. I like to set up unusual compositional challenges for myself and try to solve them in a way that still allows the band plenty of room for improvisation and interaction.”

Rumbler is anchored by his longstanding trio, including bassist Chris Symer and drummer Jose Martinez. Jeff Coffin makes a memorable guest appearance on one tune on soprano saxophone, while Rich Cole shines on tenor saxophone on another. In addition to the fine guitarist Brian Monroney, to whom Anschell was introduced by Symer, the contributors include versatile flutist and saxophonist Hans Teuber and percussionist Jeff Bush.

From the opening strains of Thelonious Monk’s “Misterioso,” it’s clear that Rumbler is less a showcase for Anschell’s piano playing than for his writing and arranging. For “Misterioso,” he heard in his head distorted guitar and a kind of power-rock countermelody. With guitarist Monroney providing the sonic edge, the frequently performed classic takes on intriguing new life.

Anschell’s favorite composition on the album, “Captive Light,” written in 5/4, “sounds clean and simple, but it’s very challenging for the improviser as the meter turns around against itself,” he says. His distinctive take on the Beatles’ “For No One” (from Revolver) pointedly avoids the tendency of many jazz artists to perform pop songs as written, just adding a facile swing feel.

With a wide range of ethnic styles at his fingertips, including the Afro-Peruvian lando (as heard on “Dark Wind”) and South Indian rhythms, Anschell has myriad directions to go in issuing those challenges to himself—and the listener.

Born in Seattle in 1959, Bill Anschell was a self-taught pianist who did not take formal music lessons until he enrolled at Oberlin College. He transferred to Wesleyan University, where he had the good fortune to study with esteemed saxophonist and composer Bill Barron and mridangam master T Ranganathan, whose teachings had a powerful impact on Anschell’s approach to rhythm.

Anschell subsequently studied arts administration at the University of Wisconsin. In 1989, armed with a master’s degree, he went to Atlanta to become Jazz Coordinator of the Southern Arts Federation.

While with the organization, he created “JazzSouth,” an internationally syndicated radio show; published a book on grant writing; and dove headlong into the city’s jazz scene as a sideman and leader of his own trio. The trio performed at the 1996 Summer Olympic Games and Atlanta Montreux Jazz Festival and toured South America four times.

During the early to mid-1990s, Anschell worked with singer Nnenna Freelon as her accompanist, arranger, and music director, contributing to several albums of hers in one or more of those guises. He made his own album debut in 1995 with Rhythm Changes, a mix of originals, bebop classics, and standards, and followed it in 1998 with the eclectic a different note all together, which was selected as one of the top 10 jazz albums of the year by UPI.

In 2002, Anschell, his wife, and their four-year-old son moved back to Seattle to be near their extended families. To say the Pacific Northwest has been good to him would be a huge understatement, judging by the regional honors and awards that have been bestowed on him and the opportunities he has had to alternate between his own projects and a multitude of ones involving first-rate players in collective-style settings.

Anschell and his trio will celebrate the release of Rumbler at Tula’s in Seattle on Saturday, Feb. 11. He’ll also be appearing with his quartet (Brian Monroney, g; Chris Symer, b; Brad Boal, d) at the Mount Baker Theater in Bellingham on Sunday, Jan. 29 (4:00pm), presented by The Jazz Project. “Each of the tunes on Rumbler has a very distinct personality,” Anschell says. “I’m really looking forward to seeing what directions they take when we stretch out and explore them in concert.”