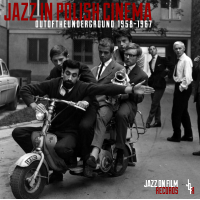 slideshow
Jazz on Film Records announces the release on November 17th of a definitive 4-CD box set titled Jazz in Polish Cinema (Out of the Underground 1958-67) with rare and previously unreleased original soundtracks following its highly acclaimed French New Wave Volume, that reached # 5 in Mojo Magazine’s best soundtrack CDs of 2013.

The box set is a treasure-trove of rare and previously unissued classic jazz film soundtracks written by a pair of legendary Polish composers-pianists Krzysztof Komeda and Andrzej Trzaskowski. Among the first time ever releases in any format on the set is the soundtrack to a celebrated classic of Polish New Wave cinema Night Train (Pociąg) (1959) with music by Trzaskowski (it is based on the swing band leader Artie Shaw’s “Moonray" theme with a vocal by acclaimed Polish jazz vocalist Wanda Warska. Also released for the first time in its entirety is Komeda’s classic jazz score for Andrzej Wajda’s Innocent Sorcerers (1960) which features the great Polish trumpeter Tomasz Stanko.

The set also contains both previously unheard and rare releases featuring the likes of Don Cherry, Gato Barbieri, Zbigniew Namyslowski and Michal Urbaniak. The CDs are remastered to the highest quality attainable by a specialist in the field, the vast majority transferred direct from the original analogue master tapes. Other rare “alternative" studio and “live" versions of tracks from the film scores are also included in the set.

As well as being an exclusive themed collection of jazz soundtrack CDs, the box set also contains a deluxe illustrated 80-page bound booklet that examines in-depth a fascinating and highly significant period in Polish cultural history. Focusing on the sudden explosion of artistic possibilities that followed the cultural ‘thaw’ of 1956 in Soviet-controlled Poland when jazz broke out of the underground (it had previously been banned under Joseph Stalin in a period known as ‘catacomb’), the booklet is annotated by the UK Jazz journalist Selwyn Harris(the producer and curator of the set who writes for leading UK jazz publication Jazzwise). It begins with an introduction to Polish jazz during the post-war period by the respected Polish jazz author- composer Adam Sławiński, writer of the original liner notes for Komeda’s pioneering European jazz album Astigmatic (1965). It highlights a period in which ground-breaking young filmmakers such as Roman Polanski and Jerzy Skolimowski and leading lights of the post- war ‘Polish Film School’ generation such as Andrzej Wadja and Jerzy Kawalerowicz were integrating jazz into their movies.

Marking the box set release is a major launch event taking place on Saturday November 15th in the Barbican Cinema at the Internationally acclaimed EFG London Jazz Festival. The event will feature a screening of Roman Polanski’s Knife in the Water with an introduction by the box set’s producer and curator Selwyn Harris and a panel discussion to feature special guests including leading East European UK film writer/historian Michael Brooke. There will also be an exclusive ‘live’ set from leading young experimental 2013 ‘Take Five Europe’ Polish pianist Marcin Masecki offering his own very personal take on the Komeda soundtracks on the CDs.

The box set release is supported by the Polish Cultural Institute in London.