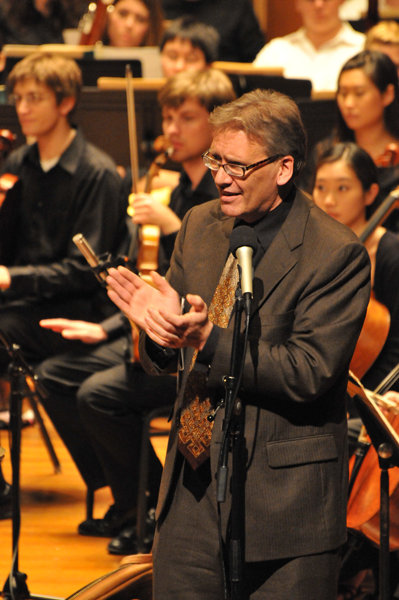 slideshow
“Schaphorst's writing and arranging, like that of Duke Ellington, is for individual musicians." —Mark Corroto, All About Jazz

Ken Schaphorst, New England Conservatory's chair of jazz studies, leads the NEC Jazz Orchestra in The Music of Ken Schaphorst, a program of his original music and arrangements. The free concert takes place at 8:00 p.m. on Thursday, December 12 at NEC’s Jordan Hall, 290 Huntington Avenue, Boston. For more information, log on to necmusic.edu or call 617-585-1260.

The program will include music from Schaphorst’s 1999 Naxos Recordings release Purple, along with several newer pieces, including two compositions influenced by the mbira repertoire of Zimbabwe. NEC faculty member Nedelka Prescod will join the band to sing Schaphorst’s arrangement of Charles Mingus’ “Goodbye Pork Pie Hat,” with the lyrics Joni Mitchell created for her Mingus album. Donny McCaslin, a faculty member in the jazz studies department, is represented by Schaphorst’s new arrangement of “Stadium Jazz” and by a featured solo on Schaphorst’s “Blues for Herb,” written for legendary Boston trumpeter/educator, Herb Pomeroy.

NEC’s Jazz Studies Department was the first fully accredited jazz studies program at a music conservatory. The brainchild of Gunther Schuller, who moved quickly to incorporate jazz into the curriculum when he became President of the Conservatory in 1967, the Jazz Studies faculty has included six MacArthur “genius" grant recipients (three currently teaching) and four NEA Jazz Masters, and alumni that reads like a who’s who of jazz. Now in its 44th year, the program has spawned numerous Grammy winning composers and performers. As Mike West writes in JazzTimes: “NEC’s jazz studies department is among the most acclaimed and successful in the world; so says the roster of visionary artists that have comprised both its faculty and alumni.” The program currently has 114 students; 67 undergraduate and 47 graduate students from 12 countries.