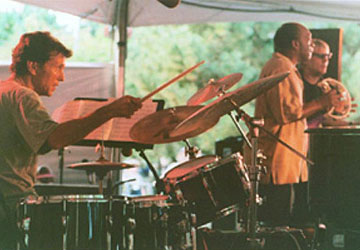 Now in their 10th year, Toph-E and the Pussycats is a group of well-respected and professional musicians (Clifford Carter, Will Lee, Ralph MacDonald, David Mann, and Chris Parker) who share a great love for rhythm and blues&#151and play it in an experimental jazz context. Based in New York City, they share an impressive list of credits and career connections.

As a band, Toph-E & the Pussycats play an eclectic mix of original jazz, written by Parker, Carter, Lee, and Mann. Without a doubt, the hits of Ralph MacDonald are perennial band favorites along with reinterpretations of jazz standards by Monk, Miles, Herbie Hancock, and Duke Ellington as well as Pussycat contemporaries like Richard Tee and Don Grolnick.

A “musical philosophy" or the “direction" for the band should be called “R & B-Bop," since the approach to the material comes from collective jazz, funk, and rhythm and blues influences.

The omission of a guitarist is deliberate and a nod to the great quartets and quintets led by Art Blakey, Horace Silver, and Thelonious Monk. It's a way to keep the focus on the rhythm section and the interaction between drums, percussion, and bass. Without a guitar there is more solo space for piano, tenor sax, bass, and percussion. Subsequently, the dynamic range is enveloped by the volume limitations of mostly acoustic instruments.

The Pussycats are the softest, warmest, most affectionate players a drummer could hope for and these guys positively 'purr' on stage or in the studio and their musical personalities are stealthy, reactive, and feline! Their new studio album, No Ordinary Day, is musical confirmation.

Ralph MacDonald, percussionist and Grammy-winning songwriter, started with Harry Belafonte when he was only 16 and went on to have Grammy-winning hit records of his songs recorded by Bill Withers, ("Just the Two of Us"), Donny Hathaway and Roberta Flack, ("Where is the Love"), and Grover Washington, ("Mister Magic"). Since then, Ralph has performed on countless recordings with artists as varied as George Benson, Tom Scott, and Jimmy Buffett.

Clifford Carter, on piano and keyboards, has been the pianist with Patty Scialfa, James Taylor, and Art Garfunkel. In addition, Cliff has toured with Bryan Ferry, Betty Buckley, Chris Botti, saxophonist Bill Evans, and Brethren Crazed Man and the Wildlife Ensemble.

David Mann, tenor and soprano saxophones, has released solo albums (his most recent is, Finding My Way Home with his brother, bassist Ned Mann), as well as producing other artists such as Nelson Rangell, Rachel Z, and the late Waymon Tisdale. David's recording credits are extensive, including Tower of Power, James Taylor, Luther Vandross, Jeff Lorber, Paul Simon, and Bob James.