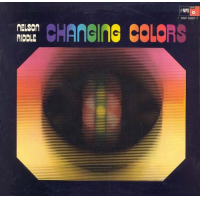 Nelson Riddle slowed down a bit in the 1970s. After spending the two previous decades arranging dozens of albums credited to him and probably dozens more for  lucrative ghost projects, Riddle worked on just one or two albums a year in the '70s before his comeback with Linda Ronstadt's three hit Songbook albums starting in 1983. For Riddle, there were a couple of 101 Strings dates in 1970, an Ella Fitzgerald session (Dream Dancing) in 1972 and a Michel Legrand tribute as well as others. But perhaps his finest album of the decade was Changing Colors, which he recorded for the German MPS label with Claus Ogerman co-producing alongside Willi Fruth of MPS.

On this album, you sense that Riddle felt truly free from the confines of earlier vocal and Easy Listening albums, which called for a certain rigidity. He seemed to have free rein to do his thing on the MPS release, and the results are magical and deeply moving. The album was recorded in Munich in August 1971, and Riddle also was there to conduct. How did Riddle and Ogerman manage to join forces? They met in Las Vegas while Ogerman was the leader and arranger for Barbra Streisand's show at the International Hotel.

Ogerman had arranged Oscar Peterson's sultry Motions and Emotions album for MPS a few years earlier and told Riddle about the label and its policy of leaving arrangers alone to do their thing. Once Ogerman secured MPS for the project, Riddle agreed to two albums—Changing Colors and Communication, which is less successful by comparison, since it features quite a few songs by German composers unknown to the American ear. [Pictured above, Nelson Riddle conducting the Changing Colors session]

The orchestra on Changing Colors was cobbled together from three sources: the brass section came from the Bavarian Radio Big Band, the string section belonged to the Kurt Graunke Orchestra and an elite group of German studio and jazz musicians was used, including Charly Antolini on drums, Ack van Rooyen on flugelhorn and Ernst-August Quelle on piano and organ. [Pictured above, Nelson Riddle conducting the full orchestra in Munich]

The album opens with an Ogerman original, My Life, with the intro arranged for some reason almost identically to Marty Paich's opener for the 5th Dimension's 1967 hit, Up Up and Away. From there, Changing Colors features a fun mix of pop songs of the day, including My Sweet Lord, Close to You and Just a Little Lovin' as well as a bunch of bossa nova numbers (Riddle's own Sao Paulo Naomi and the title track, and Antonio Carlos Jobim's Lamento). I often listen to this one over and over again and hear something new each time. [Pictured above, Claus Ogerman, right, with Willi Furth]

Interestingly Close to You on the back cover was miscredited. The German production team probably didn't have the record yet to give a listen so it assumed Close to You was the 1940s song by Jerry Livingston, Carl Lampl and Al Hoffman. Instead, it's (They Long to Be) Close to You by Burt Bacharach and Hal David, which was captured correctly on the credits inside the album above the liner notes. Riddle died in 1985.

Here's the 5th Dimension's Up, Up and Away with Marty Paich's arrangment...