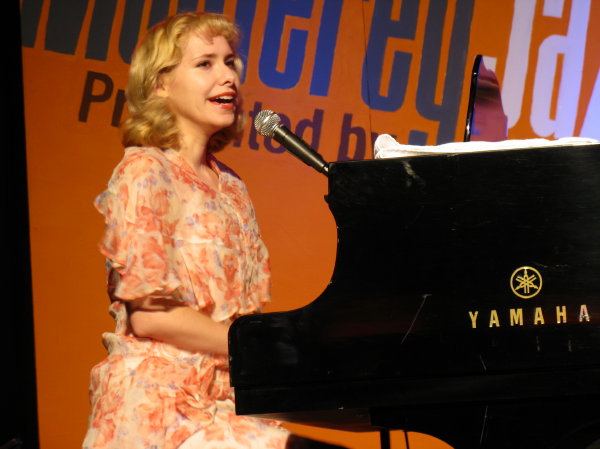 slideshow
FEINSTEIN'S AT LOEWS REGENCY, the nightclub proclaimed “Best of New York" by New York Magazine and “an invaluable New York institution" by The New York Post, continues its star-studded Winter 2011 season with “I Want To Live!"&#151an evening with NELLIE McKAY, a woman with dubious moral standards, often a guest in seedy bars... The return engagement of the critically acclaimed singer, songwriter and actress, featuring songs from her latest CD Home Sweet Mobile Home, will run from March 22 to April 2. According to The New Yorker, the new disc “covers a wide range of pop styles, from rock and soul to Latin and reggae, and is a delight. In concert, McKay is funny and touching, ceaselessly clever and scarily talented." While her 8:00 PM/8:30 PM early shows will offer her eclectic mix of standards and original material, the 10:30 PM “Late Train" shows on Fridays and Saturdays will exclusively feature McKay's own distinctive compositions. McKay, who performs on piano and ukulele as well as vocals, will be joined by a trio of musicians; all shows take place at the Loews Regency Hotel (540 Park Avenue at 61st Street).

NELLIE McKAY has been a creative dynamo since her audacious double-album debut Get Away From Me, releasing five critically acclaimed albums, including 2009's Normal As Blueberry Pie: A Tribute to Doris Day and her recent CD, Home Sweet Mobile Home.

She has won a Theatre World Award for her portrayal of Polly Peachum in the Broadway production of The Threepenny Opera and performed onscreen in the film PS I Love You, as well as writing original music for the Rob Reiner film Rumor Has It and contributing to the New York Times Book Review. Her music has also been heard on the TV shows “Weeds," “Grey's Anatomy" and “NCIS," and Nellie has appeared on numerous TV shows including “Late Show with David Letterman" (with the Brooklyn Philharmonic), “The View," “Late Night with Conan O'Brien," “Late Late Show with Craig Ferguson," “Live with Regis & Kelly" and “CBS Saturday Morning."

In July, the Chase Brock Experience produced a ballet of her third album, Obligatory Villagers, while Nellie recently finished filming opposite violin prodigy Philippe Quint on the independent film Downtown Express and contributing to the soundtrack for the Martin Scorsese HBO series “Boardwalk Empire."

FEINSTEIN'S AT LOEWS REGENCY will present NELLIE McKAY from March 22 through April 2 with the following schedule: Tuesday through Thursday at 8:30 PM; and Friday and Saturday evenings at 8:00 PM and 10:30 PM. All shows have a $60.00 cover, with $75.00 premium seats available, with an additional $40.00 food and beverage minimum. Jackets are suggested but not required. FEINSTEIN'S AT LOEWS REGENCY is located at 540 Park Avenue at 61st Street in New York City. For ticket reservations and club information, please call (212) 339-4095 or visit us online at feinsteinsatloewsregency.com and TicketWeb.com.