SOURCE: ALL ABOUT JAZZ PUBLICITY
January 16, 2014
Sign in to view read count 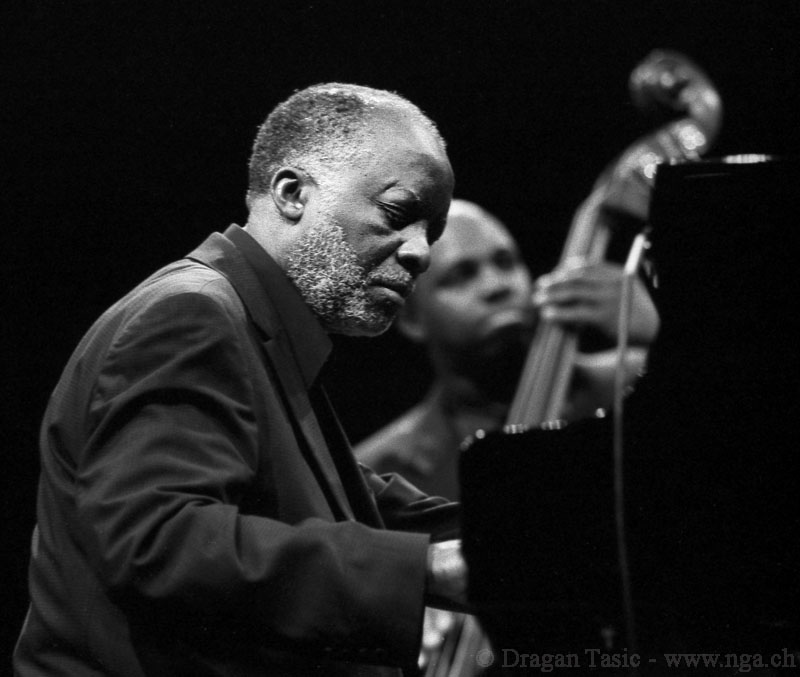 slideshow
The term “jazz legend” is perhaps one that is over used, but how else do you adequately describe Mr. Ahmad Jamal, NEA Jazz Master? Certainly, those fortunate enough to grab a ticket for the Pennsylvanian pianist’s one-off Irish gig in Vicar Street, Dublin on 24th January will be left in no doubt as to why Jamal is considered as one of the most influential jazz musicians of all time.

At 83 years of age, Steinway recording artist Jamal is in remarkably good shape and his creative juices have simply never ceased to flow. That he’s producing a new album every other year on average says much about the creative fire that still burns within. As his latest album Saturday Morning (Jazz Village, 2013) demonstrates, Jamal’s fire burns with an even greater intensity than when he first recorded back in 1951.

Jamal’s significant influence on trumpeter Miles Davis has been well documented over the years but a host of other jazz pianists such as Jan Johansson, Keith Jarrett, Jean-Michel Pilc, Brad Mehldau, Hiromi and Tribal Tech’s Scott Kinsey have acknowledged their debt to Jamal: “The way I think about phrasing and playing in general, a lot of it comes from Ahmad Jamal,” says Kinsey. “It's so inspiring to me, the way he plays, the way he hears music, the way he phrases, the use of space, the touch, everything. His concept and the feeling he has, and the swing… Nobody really phrases like him. He has a very conversational way of phrasing and sweetness in the melodies and just beautiful ideas; I think Keith Jarrett got that from him.”

Perhaps the influence that Jamal has had on other musicians stands as his greatest legacy, but as the pianist told All About jazz in a 2010 interview : “I have to leave that to the historians and the public and the journalists. How can I sit and think about my legacy? I'm always going forward. I don't think about what I have done but what I have yet to do.”

Jamal prefers the term American Classical Music to jazz and alongside him in this remarkable three-man orchestra are three of the best in the business: drummer Herlin Riley first played with Jamal in the 1980s, was a key member of trumpeter Wynton Marsalis’s group from 1988 to 1994 and plays in the Lincoln Center Jazz Orchestra; bassist Reginald Veal also played in Marsalis’s group alongside Riley and joined Jamal’s ensemble in 2012. Percussionist Manolo Badrena is best known for his work in jazz-fusion outfit Weather Report on the album Heavy Weather (Columbia, 1977) and in Joe Zawinul’s Zawinul Syndicate.

The chemistry between Jamal and his three musicians is electrifying to behold and to witness Jamal’s orchestral improvisations is to witness a truly unique artist at work.

There is quite simply no piano-led ensemble quite like Mr. Jamal’s and this rare Irish appearance—one of only five performances scheduled for Mr. Jamal in Europe this year—is an essential diary date for jazz fans and contemporary piano fans alike.