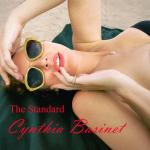 slideshow
A modern Christmas classic, Santa Baby by Cynthia Basinet's is headed to one of the hottest shows on TV. On Tuesday the 18th, the 10th episode of season four, entitled “Free Ride” will air, and the sultry and smooth voice of Basinet will be bringing holiday cheer to the cast as well as millions of viewers.

The number four ranked action drama will air on CBS in its regular timeslot, right after perennial favorite NCIS. The episode features an undercover investigation on a carrier, and sees the cast split up as Christmas draws near. But with a little Hollywood magic, and some sexy singing, you can be sure that everything will work out in the spirit of the season.

Santa Baby is available on Basinet's new album, The Standard. An epic production fifteen years in the making, the record is full of new mixes including Going Out Of My Head, Blue Moon, and Sweet Dreams. And the Lee Musiker arrangement of The Christmas Song is simply a must-have for the holidays.

Currently The Standard has been made available on itunes, but it will be seen at other outlets soon. This is a gift that really will perk up the ears of music fans of all types. With a poppy, jazzy mix, the record is perfect for listeners of all ages.

Cynthia Basinet is best known for her iconic 1997 rendition of the classic Santa Baby which she recorded as a gift. This version, often incorrectly attributed to Marilyn Monroe, has influenced today's artists. Cynthia, or “C" as she's often called, has been active in humanitarian work for many years, and was even co-nominated for a Nobel Peace Prize in 2005 in an effort to recognize the efforts of women in promoting peace for the 100th anniversary of the prize.

About Welcome to Dreamsville Records

Founded in 2000 the company is an indie record label based in Los Angeles, California. The label represents Cynthia Basinet, Checker Man, and others. You can email the label's contact person Ash Pezzola for more information.