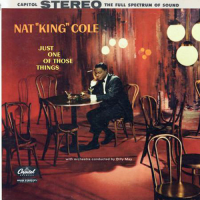 slideshow
By the time Frank Sinatra arrived at Capitol Records in March 1953, Nat King Cole had been with the label since its start in 1942. During those years, in the mid-1940s, Cole set the standard for the relaxed, swinging jazz singer, starting with his appearance in the 1944 film Swing in the Saddle, singing By the River Sainte Mariewith his trio. By the late 1940s, Cole had begun to be featured on singles backed by a big band and with strings, most notably Orange Colored Sky in 1950, with Stan Kenton, and Mona Lisa that same year, with the Les Baxter Orchestra. As the 10-inch LP era dawned in the early 1950s, Cole was often in the studio recording plush albums for Capitol, a work schedule that only increased when the LP expanded to 12 inches in 1955. Over time, Cole was positioned by Capitol as a debonair, cool-tempered pop singer as Sinatra began to dominate the label's “updated swinger" category.

The album showcased Laine at his relaxed, radiant best, swinging free from the sticky confines of the pop trap he found himself in once he made a Faustian bargain with A&R chief Mitch Miller, who transformed into a faux cowpuncher. On this album, we get to hear Laine's jazz potential had he been in better hands at another label. On songs like Stars Fell on Alabama, Until the Real Thing Comes Along and If You Were Mine, Laine shows enormous skill as a jazz singer. As with the Cole album, there wasn't a bad track on the LP, just great playing and singing on top.

By the late 1950s, with the advent of stereo, pop became too powerful a pull for singers to buck given the paydays and high visibility. But before Capitol and Columbia figured out the bland recipe that worked best for mainstream appeal and maximum profits, Cole and Laine were able to record flawless jazz vocal albums that hold up to this day.

JazzWax clips: Here's Nat King Cole and his trio in 1944 in Swing in the Saddle singing By the River Sainte Marie. Move the time bar to 00:50...

Here's Cole on his 1957 TV show singing The Party's Over from his album Just One of Those Things...

And here's Frankie Laine singing If You Were Mine from Jazz Spectacular, with pianist Sir Charles Thompson and alto saxophonist Willie Smith in the intro...