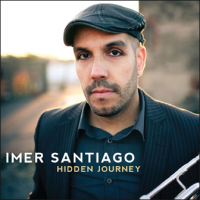 slideshow
Imer Santiago’s musical journey, which began in his native Ohio with stops in New Orleans and Austin, took an important turn in 2007 when he relocated to Nashville. There the accomplished young trumpeter forged a close bond with saxophonist Rahsaan Barber, one of the local jazz scene’s key players as well as the owner of Jazz Music City Records. On August 27, Jazz Music City will release Hidden Journey, Imer Santiago’s impressive debut as a leader.

“You may not associate Nashville with jazz or Latin jazz,” says Santiago, now 36, “but Rahsaan has an open mind to what the future can be. And he’s an entrepreneur. He’s one of my best friends and truly a brother. All those things led me to ask him to produce this record.”

Santiago contributed most of the album’s compositions and, with Barber, all of the album’s arrangements. The core quintet heard on Hidden Journey, in addition to Santiago and Barber, is rounded out by pianist Bruce Dudley, whose The Solo Sessions was released by Jazz Music City last year; bassist Jon Estes, who also mixed and mastered the new CD and shot the striking cover photographs; and drummer Josh Hunt, currently touring with bluegrass great Alison Krauss, among other artists.

Santiago plays “What a Wonderful World” as a lyrical homage to Louis Armstrong, taking the tune in waltz time instead of the usual 4/4. Armstrong had been one of Santiago’s earliest favorites. While he was working on his master’s degree at the University of New Orleans, Santiago’s admiration grew even deeper when he discovered the profound respect New Orleans trumpet players had for the late jazz giant.

Edwin Imer Santiago was born on October 26, 1976, in Lorain, Ohio, to parents originally from Puerto Rico. He took up trumpet while in the fifth grade, and grew up listening to church hymns and to African-American gospel songs that had been translated into Spanish. Remaining active in church music, he toured from 2004 to 2007 as a member of the prominent Austin-based Christian rock band Salvador, with whom he still plays occasional dates.

After high school, where he played in the orchestra, marching band, and jazz band and discovered the music of Miles Davis and Charlie Parker, Santiago spent five years at The Ohio State University, where trumpet-playing professor Pharez Whitted was a huge influence on his musical development. After earning bachelor’s degrees in jazz studies and atmospheric sciences from Ohio State, Santiago received a master’s of music degree in jazz studies in 2000 from the University of New Orleans, where his instructors included Ellis Marsalis, Wendell Brunious, Harold Battiste, and Clyde Kerr Jr.

Initially drawn to Nashville because Salvador’s management and record label were located there, Santiago began teaching middle school in 2007 and in August 2012 also began working part-time as an adjunct trumpet instructor at Tennessee State University. He will begin working in the fall of 2013 as the director of the Metropolitan Nashville Public Schools’ ambitious new district-wide mariachi music program for students in grades 6 through 12.

Besides playing with and co-leading El Movimiento, which grew out of a weekly jam session that he, Barber, and Rodriguez launched in 2008, Santiago does sessions in Nashville studios on an average of twice a month. One of his most interesting studio dates was a recent collaboration with musicians in Mumbai, India, on a dance tune titled “Battameez Dil.” Santiago recorded his trumpet, along with a horn section in Nashville, while the producers in India communicated with them over Skype. “They could see and hear us,” he says of the Mumbai musicians. A lively Bollywood-style video of the song can be viewed on YouTube.

With the release of Hidden Journey, Imer Santiago steps out of the shadows as a trumpet stylist and composer to be reckoned with in the jazz world at large, and provides additional evidence of the exciting new jazz movement that’s emerging in the country music capital.

Santiago will be performing a CD release show at the Nashville Jazz Workshop on Saturday 8/24 with additional dates to be announced in several cities.