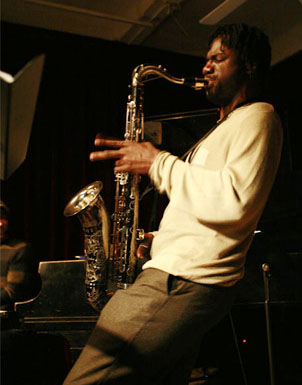 slideshow
The saxophonist Myron Walden was cultivated at Smalls, New Yorks magic garden for jazz musicians in the 1990s. There, in groups and on his own, he began to find his sound and style and temperament as an improviser, most often on alto saxophone.

Hes been methodical and emotional, energetic and honest, following chord changes with a focused tone until his long notes start to ripen and burst in the upper register.

Hes done this in various settings. One has been driving, hectic, no-piano, small-group jazz: a post-Wayne Shorter saxophonists boxing ring. Another has been the glowing, pastoral gospel jazz of Brian Blades group, the Fellowship Band. Both kinds of music, in different ways, reflect a deep trust of the audience. Theyre unafraid of the earnest gesture.

This month hes performing every week at the Jazz Gallery, giving public previews of new groups hes been developing recently. (Within the next six months hell release three new records on his own label, Demi.) On Wednesday he performed with a quintet, In This World, doing a kind of serious and benevolent ballad music.

The band includes the pianist Jon Cowherd, also from Mr. Blades band, a guarantor of contemplation. Curiously, almost stubbornly, he plays jazz as if it were one long hymn, with quiet tolling chords and pedal tones. The band also includes the guitarist Mike Moreno, who made his single notes liquefy and evaporate, removing the edges with applications of his volume pedal.

Myron Walden performs next at the Jazz Gallery, 290 Hudson Street, at Spring Street, South Village, on Wednesday and on Sept. 23 and 30, each time with a different band and repertory; (212) 242-1063, jazzgallery.org.