It took me so long to come to singing—to finally admit to myself that this is really what I want to do,” says Lee. “Then it took another decade-plus for the songwriter in me to emerge. I’m the epitome of the late bloomer. 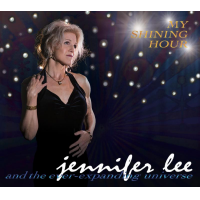 slideshow
With her first two albums, Oakland-based vocalist Jennifer Lee established herself as a gifted interpreter of the American and Brazilian Songbooks, producing a critically hailed body of work. On her new CD, My Shining Hour, Lee emerges as a composer who, in the nine years since her last release, has developed a striking repertoire exploring the human condition with humor, compassion, and imagination.

“I always wrote a little bit,” says Lee, “but I certainly never thought of myself as a songwriter. Then a shift happened and all this music started channeling in. It’s like some crazy, overactive muse attached itself to me.”

Sprague, known for his extensive work with Chick Corea, Charles McPherson, and Hubert Laws, produced the album, which was recorded at his studio in Encinitas. He also produced Lee’s first two discs—Jaywalkin’ (2003), named “finest debut of the year, big label or small” by Dan McClenaghan of All About Jazz, and Quiet Joy (2009), a mix of originals, standards, and Brazilian songs described as “a JOY from start to finish” by the late drummer and Grammy-nominated producer Bud Spangler.

“Peter is an extraordinary musician and a deeply soulful player,” Lee says. “Working with him over the years, watching how he’ll reharmonize or phrase a line, I’ve learned so much. It’s definitely influenced my writing.”

Lee wrote 11 of the 13 songs on My Shining Hour; all 13 were co-arranged by Lee and Sprague. The Harold Arlen-composed title track (and album opener), which contains an original vocalese written by Lee, is dedicated to her stepfather. “Song of Happy,” the other non-original on the album, is an ebullient Latin number by guitarist Abel Zarate, best known as a co-writer of the Malo hit “Suavecito.”

“Song of Happy” and “Perfect Rendezvous” are duets pairing Lee’s light and bright sound with the warm, resonant baritone of Carey Williams, Jennifer’s life partner and musical collaborator who played with Zarate in the 1970s rock/funk/fusion band The Force. “Carey and I had been performing ‘Song of Happy’ live since 2011, and I fell in love with the song. It’s just so fun and uplifting,” Lee says. “When I brought it to Peter, he created a super-dynamic arrangement for it, which inspired me to write that intricate tapestry of background vocals. The recording is a gift we get to give to Abel.”

Other album highlights are the soulful ballads “Speak Your Love” and “Home,” and the playful, gospel-like “Crammin’ Crepes with Cathi at the Cock-a-Doodle Café,” a tribute to the late jazz singer/songwriter and Jennifer’s close friend Cathi Walkup: “She was a very clever lyricist who encouraged my songwriting endeavors before I ever thought of myself as a songwriter.”

Born in 1964 in Redwood City, just south of San Francisco, and raised in nearby Menlo Park, Jennifer Lee ended up at Menlo-Atherton High School as a pianist to take advantage of the school’s respected jazz program. She continued her jazz piano studies at Foothill College, often accompanying vocalists, all the while nursing her secret desire to sing. She didn’t take the plunge until an early, unwanted glimpse at mortality radically changed her priorities in the late 1980s, when she dropped out of the University of Massachusetts, Amherst to tend to her stricken father.

“My dad got really sick and I came back from school to take care of him,” Lee says. “He died the next year. He was only 51. That really brought things into focus for me. I realized that none of us knows how long we have here on planet earth, so I’d better do what I want to do now.” After her father’s passing, she returned to the Foothill College music department, but instead of backing other singers she took over the microphone herself.

Subsequently studying with esteemed Bay Area jazz singer Kitty Margolis, Lee gradually worked up the courage to start performing in public and honed her jazz technique on a succession of regular gigs around the Bay Area. She made her first appearance on CD in 2001 on Quintessential, an album featuring three tracks each by five Bay Area singers, including Jenna Mammina and Cathi Walkup.

“It took me so long to come to singing—to finally admit to myself that this is really what I want to do,” says Lee. “Then it took another decade-plus for the songwriter in me to emerge. I’m the epitome of the late bloomer.”

Jennifer Lee brings her Ever-Expanding Universe band to Dizzy’s in San Diego, 8/11, and the Sound Room, Oakland, 9/23, for a pair of concerts showcasing My Shining Hour.