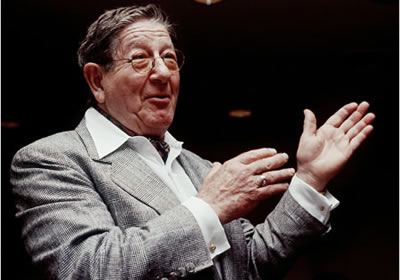 I actually organized this interview session with Teo along with John Snyder from Artists House Music and was present at the session to direct traffic. I had gotten to know Teo Macero back in 2003 when I became director of Jazz Studies at NYU. Chico Hamilton, one of my friends and colleagues at the New School, was also a close friend of Teo's and suggested that he contact me to lend support to my jazz program. Teo called me and we met for dinner soon after. From that day forward, I must have conversed with him at least once a day by phone when he wasn't bringing new music down to school for a rehearsal. Teo would call me most Sunday mornings to discuss an upcoming performance or recording session or simply to reminisce. While he was in retirement living out in Long Island, he never really stopped thinking about music and would constantly be writing new things. I'm not sure how this happened, but it seems that Teo chose me to be his friend and confidante until his death in 2008.

I guess our friendship began because he wanted to give back to my students and I became the conduit that made everyone connect. I think he was always young at heart and was always inquisitive about music and the process of learning. He fit right in with my students. For me, Teo was miraculous! I know that he has received some bad reps over the years stating that he was simply a record producer and had little creative input in his various projects, but I can attest to the fact that Teo was truly the real deal. Certainly he cannot be compared to the record producers of today, or for those that came after him, as he was a complete musician and loved being in the middle of every session.

First of all, Teo, like his boss at Columbia Records Goddard Lieberson were trained musicians. Check out the book The Label, The Story of Columbia Records, by Gary Marmorstein to see the depth and breadth of Teo's producing skills, along with his colleagues at that time. Teo was a composition graduate from Juilliard, awarded two Guggenheim grants sponsored by his mentors Aaron Copland and Leonard Bernstein. Amazing! Aside from being a close friend with Edgard Varese, Teo was also a founding member of the Charles Mingus Jazz Workshop. While Teo is best known for his work with Miles Davis, he produced a wide array of classic recordings and artists at Columbia including Monk, Mingus, Brubeck, Getz, Ellington, Basie, Broadway cast recordings including A Chorus Line and By e Bye Birdie and the soundtrack to the film The Graduate by Simon and Garfunkel, to name a few. Teo also composed for, conducted, and performed with Leonard Bernstein and the New York Philharmonic and the London Philharmonic Orchestra, and was commissioned by, and composed ballets for, the Joffrey Ballet Company, the Anna Sokolow Ballet Company, the London Ballet Company, the Juilliard Ballet Company, and the American Ballet Theatre.

I am well aware of all the controversy that has come up over the years speculating Teo's contributions with the Miles recordings that he produced. All I can say is that if you took Teo out of the equation, I am certain that Miles would have sounded great as ever, but the material and end product would have sounded quite different. For me, Teo's signature sound is on every recording that he produced. He was an advocate for Miles' music and for all music, not just jazz.

Through my long conversations with him over the years, I will always remember the deep passion and respect he held for both the music and the musicians that created it around him. I will always feel Teo's influence on me as he taught me many valuable lessons. I feel most fortunate to have had Teo Macero as my friend.