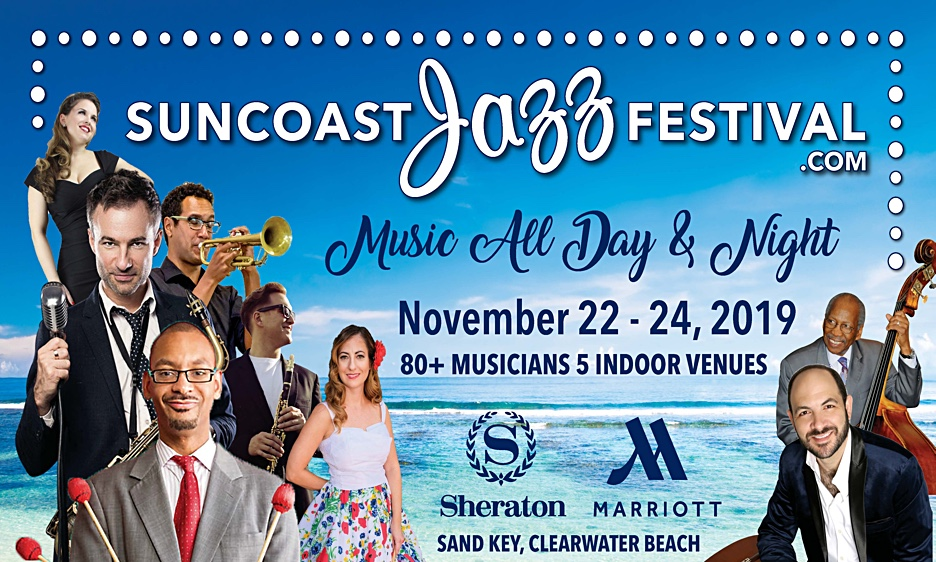 I’m looking forward to playing at the Suncoast Jazz Festival as a leader for the first time. My new group, BGQ Exploration, hopes the fun that we have exploring Benny Goodman’s quartet will translate to the audience.
—Jason Marsalis

As autumn begins its inevitable turn toward winter, the chance to enjoy a combination of jazz and sunshine becomes even more tempting. From November 22 through 25, the Suncoast Jazz Festival, which takes place on the travel-award-winning Clearwater Beach, will provide both in ample amounts. This year marks the 29th anniversary of the Festival, which continues to expand its offerings from traditional jazz to include Brazilian music, swing, big band, zydeco, Cajun and some rockabilly.

Among the musicians who have been added to the roster is headliner Jason Marsalis and the 21st Century Trad Band. Marsalis had this to say, “I’m looking forward to playing at the Suncoast Jazz Festival as a leader for the first time. My new group, BGQ Exploration, hopes the fun that we have exploring Benny Goodman’s quartet will translate to the audience.”

Tom Rigney and Flambeau, whose blend of Cajun and zydeco has made significant inroads on the Roots music scene, have performed at the festival numerous times in the past. Rigney has watched festival rosters evolve over the years. “Many festivals are now quite different than they were a decade ago. While Traditional Jazz—Dixieland, Swing, Ragtime—still makes up a significant portion of what is presented, you now might hear Cajun, Zydeco, Rockabilly, Blues, R and B, Django Reinhardt-style string swing, Western Swing, and other styles,” he states. “All of it falls under the broad spectrum of American roots music, whether it's Jazz or Blues or Cajun or old- time rock and roll.”

Also appearing for the first time is Brazilian vocalist Daniela Soledade, whose recently released debut album continues to earn accolades from press and receive widespread airplay on radio. A Clearwater resident, Soledade says, “The Suncoast Jazz Festival is mostly known for more traditional styles of jazz, so it is a great honor to be the first Brazilian artist to participate in this long running event. I cannot wait to bring the Bossa Nova back to the beach!” Says Nate Najar, the producer of Soledade’s album, who is based in Largo and has been involved with the festival for several years. “It has been very exciting to watch the Suncoast Jazz Festival evolve from this wonderful event celebrating the more traditional side of jazz to embracing the present and future of jazz while never losing sight of the past. It is so exciting to walk the halls of the hotel and, for 3 days, all day and into the late night, hear such a wide variety of world class artists in so many different venues simultaneously. It is such a vibrant scene!”

Award winning multi-instrumentalist and vocalist Adrian Cunningham, who will mark his third year at the festival, says, “Suncoast Jazz Festival knows how to do it right! The festival presents a tantalizing array of the highest quality jazz all rooted in the classic jazz tradition. And on Clearwater beach? You can't find a better setting!!”

Other nationally celebrated artists performing at this year’s festival include Wycliffe Gordon, Harry Allen and Tommy Cecil, joining a host of fan favorites and newcomers performing at five venues over the festival’s three days.

Tickets are on sale now for a variety of packages, ranging from Sponsor, Benefactor and Three-Day Weekend packages to single day and evening tickets. For more information or to purchase tickets, go to suncoastjazzfestival.com or call (727) 248-9441.

80 MUSICIANS
5 VENUES, ALL INDOORS
MUSIC FROM MORNING UNTIL LATE EVENING
November 22-24, 2019
At the Sheraton and Marriott hotels on Sand Key, Clearwater Beach