Musicians, Music Fans -- Join Us At A Free Screening Of The New Thomas Chapin Film

Journalist and filmmaker Stephanie Castillo has accomplished a combination coup and tour de force with her documentary on the music and life of composer–saxophonist-flautist Thomas Chapin. 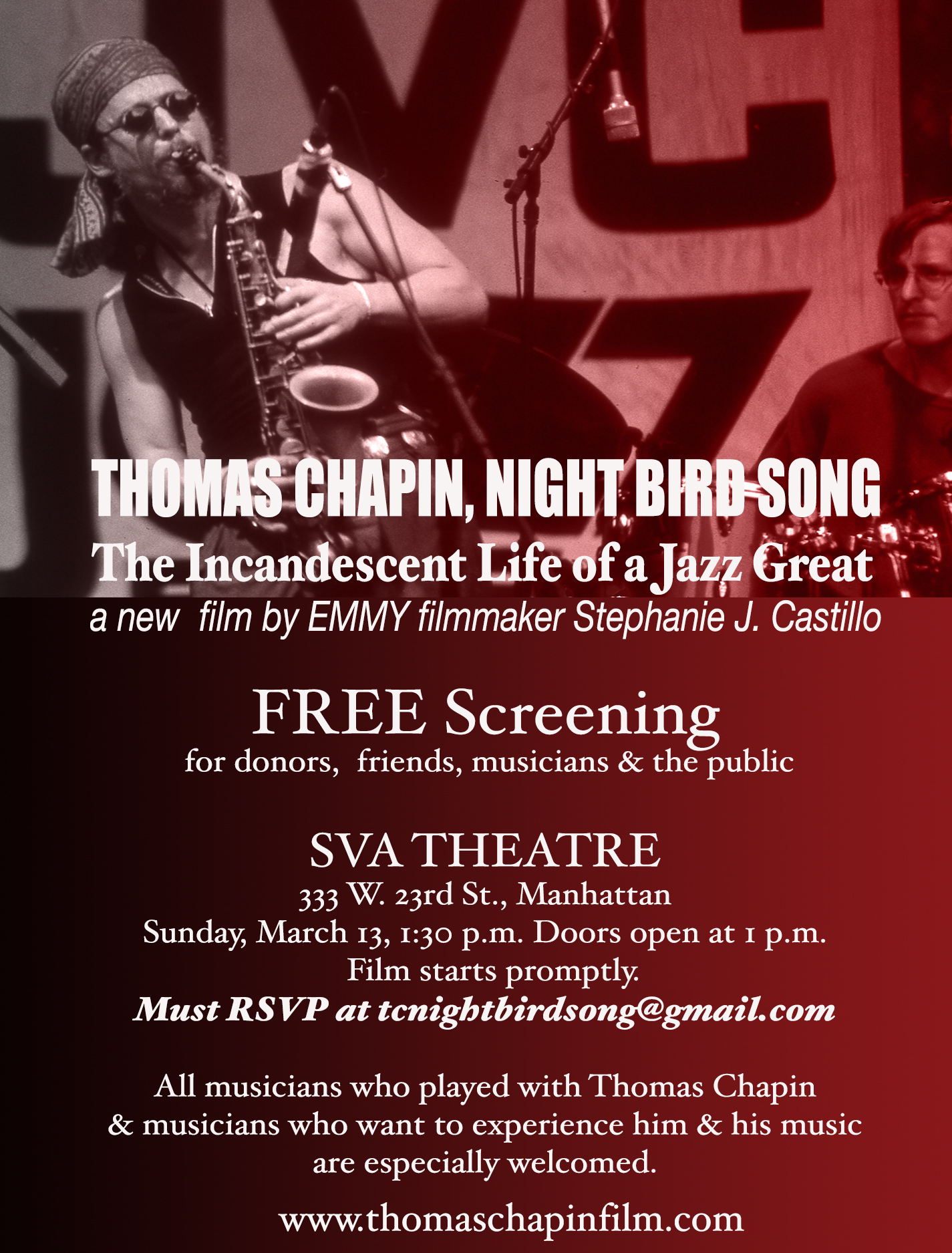 ABOUT THE FREE SCREENING

Destined to be among the great virtuosos of jazz, Thomas Chapin, an alto sax and flute master, was nearing the pinnacle of his meteoric rise when leukemia took him at the age of 40 in 1998. Fame and world recognition eluded him during his lifetime, despite the mark he left on jazz in the '80s and ‘90s. His passion for life and incandescent music remain unforgettable to fans who knew him and to musicians who played with him. Today, his music is inspiring a new generation of artists and musicians who have discovered him.

“Wow. Journalist and filmmaker Stephanie Castillo has accomplished a combination coup and tour de force with her documentary on the music and life of composer–saxophonist-flautist Thomas Chapin (1957-1998)."—Arteidolia Art Magazine

DownBeat Magazine writer says: “I was glad to be in attendance for such an inspired work.”

“What stands out about Night Bird Song is that filmmaker Stephanie J. Castillo not only captured the depth and breadth of Chapin’s music (in varied contexts) and his dedication to music in general (not just jazz) but a sense of the person himself within a historical context. There are many complete performances as opposed to highlights—it makes for a lengthy movie but it never feels overlong. For anyone with an interest in creative music in the ‘80s- 90s, Night Bird Song is essential viewing.” —NY CITY JAZZ RECORD

Advance viewers who have watched Thomas Chapin, Night Bird Song say there is an immediate sense that Chapin made a profound difference in the lives of the people that knew and worked with him.

A dynamic, powerful and engaging performer, he is painted in this intimate film as a musical explorer who pushed and transcended the boundaries of jazz and dissolved the distinctions between sound and music. Chapin left behind an avid group of worldwide fans and supporters, along with a collection of recordings that include original compositions with sounds as relevant today as they were when he first recorded them.

When asked why she made the film, Castillo replies, “After my research, I realized what an incredible opportunity I had to bring Thomas’s story and music to a world that might have never known him or might have forgotten him. I wanted to invite those who have never heard of Thomas Chapin to take the time to discover his genius, which came out through his music. I also wanted them to discover as I had in making this film the depth of talent, dedication and passion this man had about life and music. I was convinced his story would have the power to lift us all! And so in 2012, I set out to make it and to truly honor him, his music and his story, and to ensure his legacy.”

The forty-two interviews that made the final cut in the film’s 150-minute Showcase Version for premieres and showcases form the narrative backbone for film’s structure and are interwoven with a series of Thomas Chapin performance concerts from archived footage and audio recordings stored at Thomas Chapin’s archives at Duke University.

Castillo also gathered performance footage from several jazz festivals, including the 1995 highly-acclaimed performance of the Thomas Chapin Trio at the Newport Jazz Festival; from various performance venues, including Michael Dorf’s Knitting Factory; and from friends and fans who had videotaped live performances primarily in Connecticut.

Castillo edited the film herself, ensconced for 8-months in the quiet haven of Belmont, Vermont. Her final post-work on graphics, titles and a stereo soundtrack was done by editors in Honolulu, Hawaii this past December.

Alto saxophonist Thomas Chapin was born on March 9, 1957 and passed away Chapin died of leukemia in 1998 at age forty. Born in Manchester, Connecticut, he attended Phillips Academy in Andover, Massachusetts where he studied classical music and jazz. He began his serious studies in the late 1970s, attending the Hartt School of Music at the University of Hartford in Connecticut, studying with saxophonist Jackie MacLean.

In 1980 he graduated from Rutgers University where he studied with saxophonist Paul Jeffrey, pianist Kenny Barron and guitarist Ted Dunbar. From 1981 to 1986, he toured with the jazz grand master Lionel Hampton and his big band as lead saxophonist and musical director. The New York Times said of Chapin, one of the more exuberant saxophonists and bandleaders in jazz” and “one of the few musicians to exist in both the worlds of the 'downtown' experimentalist scene, and mainstream jazz.”Initially Chapin spent a good portion of his time performing and working with the important names in various factions of jazz. Aside from Hampton, he performed with Chico Hamilton, John Zorn, Dave Douglas, Ned Rothenberg, Marty Ehrlich, Ray Drummond, Betty Carter, Ronnie Mathews, Peggy Stern, Tom Harrell, Anthony Braxton and many more. For nearly 10 years, Chapin pursued his own music as band leader and composer, working with his various ensembles at festivals and clubs around the world. Chapin’s various bands and recording projects included work with The Thomas Chapin Trio, The Thomas Chapin Trio Plus Brass, Plus Strings, The Thomas Chapin Quartet, Spirits Rebellious (Brazilian group), ZASIS and Machine Gun. People that were lucky enough to have known him and/or attend one of his concerts were mesmerized by his inner and outer beauty and with his iridescent and inherent relationship to his instrument, through his body, mind and soul. You can still feel the impact the artist made on the lives of all that came in contact with him.

Laurence Donohue-Greene, Managing Editor of The New York City Jazz Record, recalls, “Thomas performing at Newport in 1995… That was a life highlight in music for me. Over 20 years ago and I vividly remember that set to this very day as still being one of the greatest Newport Jazz Festival sets I’ve ever seen.”

The film’s title Night Bird Song is from a Thomas Chapin Trio’s signature tune inspired by the striking melodic turns of a bird’s song that Chapin heard while on a midnight walk. Composed and arranged by Chapin and his bassist, Mario Pavone, the title evokes the arc in his music career that reveals he was solidly rooted in tradition yet straining its boundaries at every turn. Jazz critic Larry Blumenfeld shares about the arc, “The arc corresponds less to common categories of “downtown," “mainstream" and more to the flight paths of birds Chapin seemed to favor in song titles. With grace and individuality, Chapin took us to places—lofty and striking and sometimes dangerous—that forced a change

Stephanie J. Castillo, a former newspaper journalist who wrote for the Honolulu Star-Bulletin in the 1980‘s, is from Hawaii but has been fundraising and traveling full-time for four years to complete NIGHT BIRD SONG by the start of 2016. She heads a Hawaii-based production company 'Olena Productions with partners in Washington D.C., and Los Angeles. Currently she is based in Brooklyn to set up the film‘s premieres and screenings. She is available for interviews at [email protected] and welcomes reviews of the film from the press community. Her 30-year filmmaking career alone is worth a look, should any media be interested in doing a profile article.

Thomas Chapin left us too soon. The free SVA screening and other pending screenings in NYC will be the stage for introducing Chapin to many who never had the chance to know him or to hear him play. Chapin was well known for being a bridge to both the uptown and the downtown scenes. Pending screenings will include uptown jazz venues in Manhattan and Queens where Chapin also lived and performed.

TO SCHEDULE A SCREENING OF THE FILM