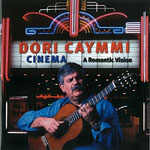 slideshow
Although his name is not as well known as some of the contemporary artists receiving constant airplay today, Dori Caymmi has a unique ability in drawing in any unsuspecting listener's immediate attention. This is not to say that the great Caymmi is an unknown artist, he was nominated for a Grammy award for his definitive album Cinema: A Romantic Vision which is also the focus of this article. The album showcases Caymmi's expert arrangement and improvisation at its arguably finest, setting “Romantic Visions" apart with seemingly effortless performances like steady ripples cast across the face of a lake.

To say that this album is strictly jazz would be inaccurate. Tracks such as “Something's Coming" share a strong resemblance to the smooth jazz genre or the modernly coined “elevator music," but Caymmi upsets the stereotype involved with this particular genre with an impeccable ear for music and sheer skill. The truly noteworthy gems in this album are the ones in which Caymmi himself plays the guitar with or without the accompaniment of a vocal artist. Numbers such as “Raindrops Keep Falling On My Head" and “Manha de Carnaval" are simply transmigratory, moving the audience into carefully imagined worlds where his songs serve as visas. Especially in the case of the latter, some of Caymmi's songs are strictly jazz or bossa nova. One can liken “Manha de Carnaval" to music from Stan Getz, Astrud Gilberto, or Brasil 65. An astonishingly tender piece.

Mr. Caymmi is no stranger to the television and movie industry, having written musical scores for plays in his native home back in Brazil as well as in American films, one such case under the direction of Spike Lee. He pays homage to two classic themes in this album, the “Pink Panther Theme" and the “James Bond (main theme)." Both of these renditions imbue different elements into the originals, lending each more depth without straying too far from the source. The “James Bond (main theme)" is given a subtler more sensual treatment through Caymmi's gentle guitar stylings. Ironically enough, this reinvention of the Bond franchise's popular theme song could possibly be considered closer to Ian Fleming's vision of British espionage. The “Pink Panther Theme" is also given a more sensual makeover but somehow manages to maintain a sense of mischief characteristic of the films. The alto saxophone solo towards the latter half is what truly defines this song as it pirouettes beyond the constraints of the established structure and yet, simultaneously reaffirming it as it leaps in a new direction and then returns to soft normalcy.

As someone who'd just been recently introduced to Dori Caymmi, Romantic Visions induces one to search for more material from this masterful musician. What proves to be most surprising is how certain aforementioned numbers that could accurately be construed as smooth jazz can still be enjoyable to people not familiar with or even opposed to the genre. Mr. Caymmi's language is composed of intricately selected notes and the stories he tells beggars the imagination by swimming through deep rooted emotions inherent in all of us.

Listen to clips from Cinema: A Romantic Vision album.