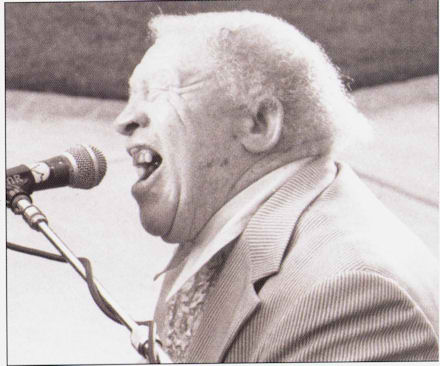 slideshow
ATLANTA, GA&#151A throng of music fans and media from the Southeast converged at Atlanta's Smith's Olde Bar on August 12 to celebrate the release (August 17) of the late and legendary Piano Red's The Lost Atlanta Tapes CD on Landslide Records. Produced by Michael Reeves and David Fulmer for Bang Bang Lulu Productions, The Lost Atlanta Tapes features 18 songs recorded live at Atlanta's Excelsior Mill in 1984, and represents the iconic entertainer's last known recording. It features some of his best-known classic songs and fan favorites. All of the performances on the new CD are previously unreleased, and eight of the tracks are songs that have never been released before on a Piano Red recording.

The evening began with a private party for the media and invited guests at the club's downstairs Atlanta Room. During the party, Smith's Old Bar co-owner Michael Reeves, who, along with partner David Fulmer, “re-discovered" the tapes for the Piano Red concert originally recorded at shows Reeves promoted with Red (aka Willie Lee Perryman) at Atlanta's Excelsior Mill in October 1984, presented a check for $500 to Bill Bolling, Executive Director of the Atlanta Community Food Bank. Guests at the party included Atlanta City Councilman Kwanza Hall, who represents the district where Smith's Old Bar is located. Hall read a proclamation from the City Council saluting the music and contributions of Piano Red, a member of the Georgia Music Hall of Fame, and presented the proclamation to Piano Red's son, Skip Perryman, and granddaughter, Krystal Ross. (Hi-res JPG attached with left to right: Skip Perryman, Krystal Ross and Atlanta City Councilman Kwanza Hall). Atlanta folk artist Al Simpson, whose painting, “Piano Red Rockin' the Blues," adorns the album's cover, was also present.

After the private party, a packed house of fans upstairs at Smith's Old Bar enjoyed a great night of music from “The Red Rockers," a band put together for this special event, which included NRBQ pianist Terry Adams (a Piano Red devotee, who knew and played numerous shows with Perryman ), guitarist Scott Ligon (a member of Adams' current band), and a host of great Atlanta musicians: Tommy Dean (bass, vocals), Charles Nesbitt (drums) and horn players Earl Ford & Karen Green. Special guests included former members of Piano Red's circa 1960s original band, Dr. Feelgood and the Interns: guitarists Roy Lee Johnson and Beverly “Guitar" Watkins. Johnson tore up the crowd with his guitar playing (he even played with his teeth) and performed several of his signature songs, including “Mr. Moonlight," which he wrote and sang originally with Dr. Feelgood back in the day and was later covered by The Beatles. Self-confessed “blues grandma" Beverly “Guitar" Watkins then wowed the audience by playing the guitar behind her back and with her soulfully funky vocals.

Oh, and the folks at Smith's Olde Bar created a special drink that night in honor of Piano Red: “The Dr. Feelgood," a wonderful libation featuring vodka, grapefruit juice, grenadine and a splash of soda!