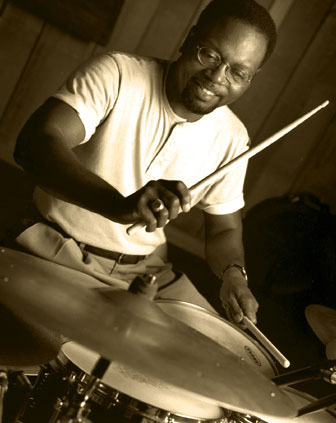 slideshow
Today for Music Education Monday, you can pick up some tips on jazz drumming via a handful of videos recorded by the veteran percussionist Lewis Nash.

Nash, who's 57 and originally from Phoenix, has made five recordings as a bandleader, but he's best known as a sideman to some of today's top jazz musicians, with more than 400 recordings to his credit.

He got his first big break in his early 20s playing with singer Betty Carter, and subsequently has gone on to play with many well-known singers and musicians, including Dizzy Gillespie, Tommy Flanagan, Toshiko Akiyoshi, Joe Lovano, Diana Krall, the Blue Note Seven, and many more.

The videos featured here today were all recorded during a master class presented by Nash in 2010 at the Mid-Atlantic Jazz Festival in Rockville, MD. Each of the clips, which run roughly five to seven minutes in length, deals with a specific topic, starting with the origins of jazz drumming, followed by some thoughts about the role of the drummer in a jazz group; how to collaborate with other musicians; how to play ballads; and how to accompany a soloist.