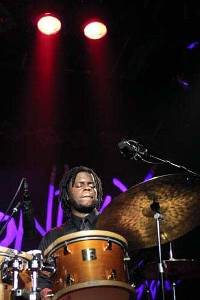 slideshow
As one of the top schools for jazz, Berklee College of Music in Boston benefits from a a steady supply of working professional musicians visiting campus to augment the instruction provided by permanent faculty.

For this week's Music Education Monday,  you can check out some of that extra instruction provided to Berklee percussion students, as we look in via video on drum clinics presented there by the well-known drummers Gregory Hutchinson and Ralph Humphrey.

A native New Yorker, Hutchinson emerged on the national jazz scene in the early 1990s and rapidly became a first-call drummer working with a wide variety of musicians, including Betty Carter, Ray Brown, Red Rodney, Joe Henderson and Charles Lloyd as well as Joshua Redman, Dianne Reeves, Wynton Marsalis, John Scofield, Roy Hargrove, Diana Krall, Harry Connick Jr, Joshua Redman, Christian McBride, Maria Schneider, the collective band James Farm, and many more. Hutchinson will be back in St. Louis next month to perform with an all-star band at Jazz at the Bistro as part of the venue's 20th anniversary celebration.

Humphrey is based in Los Angeles, with a recording and touring career spanning more than five decades. He's perhaps best known for his work in the 1970s with trumpeter Don Ellis' big band and Frank Zappa, but he's also done thousands of sessions for TV and movie soundtracks, and gigged or recorded with notables including Wayne Shorter, Al Jarreau, Toshiko Akiyoshi and Lou Tabackin, Manhattan Transfer, Natalie Cole, Joe Farrell, Tierney Sutton, Alphonso Johnson, and many others. Humphrey also has been seriously involved in music education, designing the drum program for the Percussion Institute of Technology, where he taught for 16 years, and heading the drum department at the Los Angeles Music Academy.

You can see the videos of both of their Berklee drum clinics after the jump...