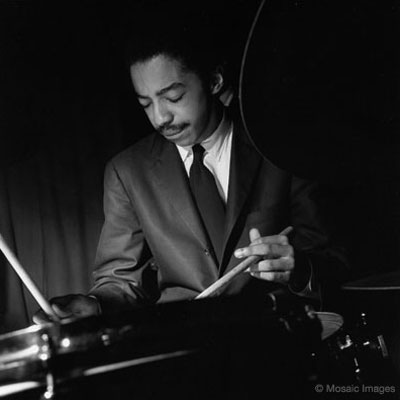 slideshow
Drummer Tony Williams burst on to the international jazz scene in sensational fashion, getting hired when he was just 17 years old by Miles Davis to join what would become known as the trumpeter's “Second Great Quintet."

Starting in 1963, that band become one of the most popular and critically acclaimed jazz groups of the decade, stretching the boundaries of the music ever further over the course of six years, more than a dozen recordings, and hundreds of gigs.

Williams would go on to play in a variety of styles, doing sessions for Blue Note with adventurous musicians including Jackie McLean, Grachan Moncur III, Sam Rivers, Andrew Hill, and Eric Dolphy and helping pioneer the fusion movement of the 1970s with his band Lifetime.

He eventually would return to a more acoustic sound, in the late 1970s reuniting with his old colleagues from Davis' band (with Freddie Hubbard on trumpet) under the name VSOP, and in the 1980s forming his own straight-ahead quintet, which helped bring to prominence musicians including pianist Marcus Miller and trumpeter Wallace Roney.

Tragically, Williams was just 51 when he died, passing away in 1997 from a heart attack after what was supposed to have been routine gall bladder surgery. But he left behind a significant legacy, as along with Elvin Jones, he was one of the most influential drummers of the era, offering a powerful combination of chops, audacity, and conceptual thinking that helped change the game for all who followed him.

In 1985, Williams presented a master class at a promotional event for the cymbal maker Zildjian, and fortunately, someone had the presence of mind to videotape it and, many years later, upload it to YouTube. You can see that video of Tony Williams' master class, presented in three parts, after the jump...