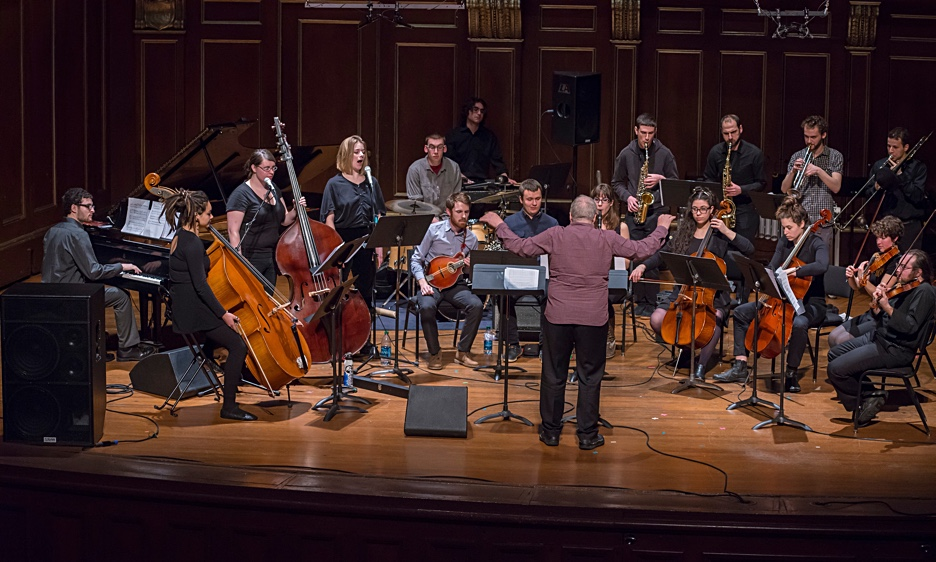 Program includes a sung story of trafficked Jewish women, the little-known work of a once popular Dominican artist, an edgy tune by Legendary Stardust Cowboy and more.

A sung story of trafficked Jewish women, a forgotten form of Macedonian folk music, the little-known work of a once popular Dominican artist, and an edgy, wild tune by Legendary Stardust Cowboy are among the pieces presented in Lost Voices, a concert featuring music by artists missing from the conversation. Performed by the inventive young musicians of New England Conservatory’s internationally renowned Contemporary Improvisation (CI) Department at NEC’s iconic Jordan Hall, the event is produced by faculty members Anthony Coleman and Lautaro Mantilla. It will be streamed on Monday, November 30 at 7:30 p.m. For information visit necmusic.edu.

Lost Voices is dedicated to pursuing, excavating, amplifying, and illuminating art and artists missing from the conversation, with works performed and arranged by CI students.

“For this concert, students went deep into their personal pantheons in order to explore questions of what becomes canonical, what become central,” says Coleman. “What stories remain untold and unheard, and why? Subgenres, marginalized groups, half-forgotten artists—whatever and whoever could be understood under the umbrella or rubric of lost voices was considered, discussed, and analyzed.”

Nine pieces which represent the breadth of thought and the range of work done within the NEC CI Department were chosen to be presented. Rihards Kolmanis developed a solo performance based on the work of Bjørn Fongaard, a Norwegian pioneer of prepared electric guitar whose work anticipated innovations from decades later, while Afarin Nazarijou dedicated Sortgar-e Naghash (The Portrait Painter) to Iranian women, who are not allowed to sing solo publicly.

NEC’s Contemporary Improvisation program addresses the unique needs of musicians seeking to move beyond traditional boundaries. The department brings together an extremely diverse group of the world’s finest young artists in a setting where they can truly grow as a community of composers, performers, and improvisers. With an emphasis on ear training, technique, conceptual ideas, interdisciplinary collaboration, and a wide range of improvisational traditions, the CI program is uniquely positioned to produce the complete 21st century global musician. Founded in 1972 by Gunther Schuller and Ran Blake, the department is “a thriving hub of musical exploration,” (Jeremy Goodwin, Boston Globe).