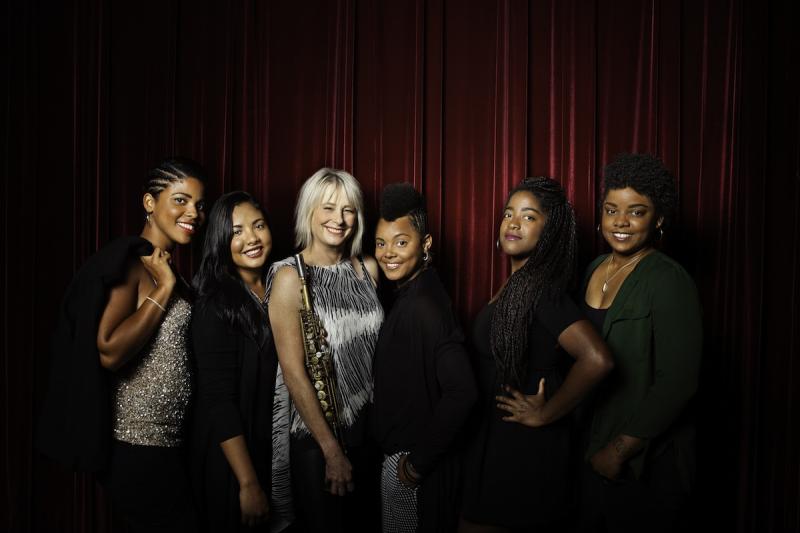 “If they are coming anywhere near your town, go see them!"—Jon Garelick, Giant Steps

Jane Bunnett's continuing quest to seek out and present musical talent untapped and unheard beyond the confines of the island nohas led her down many roads, and it was during a trip 30 years ago to Havana, Cuba she discovered then-unknown musicians and formed the all-star ensemble Maqueque (pronounced “Mah-Keh-Keh", meaning “the energy of a young girl's spirit.") Their 2014 self-titled debut CD was awarded a much-deserved Juno Award for Best Group Jazz Album of the Year.

Jane Bunnett's assembly of all-star Cuban musicians, the sextet which includes herself and five extraordinary young females, ensured a spotlight for their fluid, seamless music. “Everything I've done," Jane says with pride, “has led up to this group, which is the perfect vehicle for now." Maqueque currently includes Yissy Garcia on drums, Dánae Olano on piano, Magdelys Savigne on batá drums and congas, Elizabeth Rodriguez on violin and vocals and Celia Jiménez on bass. Maqueque often features guest stars Melvis Santa on percussion and vocals, as well as Dayme Arocena assisting vocals.

With cover art by Spain's most-famous and successful designers, Javier Mariscal, Oddara fills the air with intoxicating spirit of joy and electricity, and live, their shape-shifting enthusiasm is contagious, thrilling audiences in clubs and festivals throughout North America. Their smiling faces and lively attitude radiates their spirit, and speak to their love of performing. And audiences wouldn't have it any other way—Maqueque's fresh, inventive, no-compromise music earned the group a standing ovation at the Kennedy Center, a rare encore at the Chicago Jazz Festival, and four sold out nights at Chicago's legendary Jazz Showcase. Maqueque also received the Premiers Award for Excellence In The Arts this past October and performed in NPR offices where they filmed a session for Tiny Desk Concert series.

Jane and Maqueque will kick off their tour in San Jose, CA and will go on to play shows across the U.S and Canada with additional dates to be added. A list of confirmed dates are below.