Donatelli makes it sound so natural to hit the dead center of each note, you can almost forget how rarely it occurs in the rest of the world. Her intonation combines accuracy with ease in a way most singers can only imagine. --Neil Tesser, Grammy winning Jazz Journalist 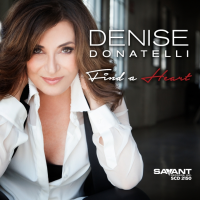 Denise Donatelli, one of today’s premiere vocalists, alternating between jazz and adult contemporary with ease, has been on quite a roll! Her last two consecutive albums have received three Grammy nominations. She has been voted into the Downbeat Critics Poll as Female Vocalist Rising Star for the past three consecutive years, and was named Female Jazz Vocalist of the Year by the Los Angeles Jazz Society. With the release of Find A Heart, Donatelli once again proves why she is the subject of such accolades.

Christopher Loudon of JazzTimes stated, “her song choices “tend to be bolder and more interesting, both in terms of material and interpretation.” With Find a Heart, Denise again proves her selections daring and impeccable by expanding the idea of the Great American Songbook beyond its heyday. In addition to Sting, the album features music written and recorded by such contemporary composers including David Crosby, Donald Fagan, Beck, Billy Childs (with lyrics written by Denise), Brenda Russell, the Yellowjackets and the rock band, Journey. “I think we made some great selections, she states, I wanted to find songs that hadn't been covered much before and selected some great music to introduce to jazz fans.”

Described as a “musician’s singer" by saxophonist Phil Woods, Donatelli was raised on the East Coast and also trained as a classical pianist. She turned to singing jazz and eventually moved to Los Angeles where she immediately found a home in the community of well- respected musicians. Donatelli’s innate musicianship and pure tone have won her spots singing for episodes of The Simpsons and numerous television promos including Turner Classic Movies. Her on-camera work consists of national and international commercials for such brands as CNN, Hyundai, Lexus, and Mercedes-Benz.

Denise’s 2012 release Soul Shadows received a GRAMMY Nomination for Best Jazz Vocal Album, and her 2010 release, When Lights are Low received 2 GRAMMY Nominations... one for Best Jazz Vocal Album and one for arranger Geoffrey Keezer in the Best Arrangement Accompanying a Vocalist category. She recorded two previous albums, What Lies Within, her first Savant release in 2008 and In the Company of Friends on the Jazzed Media label.