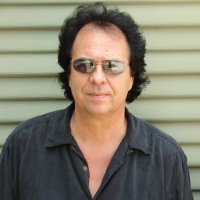 slideshow
One never knows what the multifaceted original Willie Oteri is going to do next, like switching his focus from guitar to saxophone and flute for a series of upcoming releases. Oteri has produced several well received guitar-based albums featuring some of the world's finest musicians including, Scott Amendola, Giko Pavan, Tony Levin, J.A. Deane and others, starting with the 1999 live in studio improvisation Jazz Gunn Concepts of MateMaToot which featured A-Team Austin jazz players Brannen Temple, Michael Malone, Chris Maresh, and second guitarist Chris Tondre. After Concepts of MateMaToot, Oteri was driven to record more improvised releases like the uniquely original 2003 release Spiral Out produced by Ronan Chris Murphy which featured prog rockers Tony Levin, Pat Mastelotto and Mike Keneally in a free improvised jazz setting with trumpet master Ephraim Owens, two critically acclaimed Avant-Garde based WD-41 albums followed with electric trumpet player Dave Laczko, the second incorporating the talents of Dino J.A. Deane and drummer Scott Amendola followed by Shrunken Head Shop a series of live recordings from a tour with Laczko and top German and Italian jazz musicians.

Oteri has always been a multi-instrumentalist, as he says, “Isn't every musician, really?” Having a musical mother helped with violins and a piano always available in the home. After a stint performing with a ukulele on a local pier in his early teens, later incorporating a flute borrowed from his sister, he then focused on bass to work with a local high school band soon after switching to guitar and pedal steel while doubling on saxophone and flute. Oteri put sax and flute on the back burner in the late '80s partially due to an unforeseen tragedy which took nearly 10 years out of his career. Oteri decided to pick up both sax and flute again just over a year ago.

Oteri brings us his unique styling on sax and flute with a series of recordings, joining longtime friend Dave Laczko on electrified trumpet and veteran drummer Steve Mankenberg along with various guest artists on his own label OteriTunes. The series will be featured as an ever evolving album of of live and studio recordings titled Evolution available at bandcamp.com and a series of EP albums titled Narratives in both digital and a limited number of CD formats through CD Baby.

The Bandcamp release Evolution is online now and available for streaming and download here.

The EP releases will start in May of 2018 through various outlets connected to CD Baby.