SOURCE: JAZZWAX BY MARC MYERS
May 3, 2021
Sign in to view read count 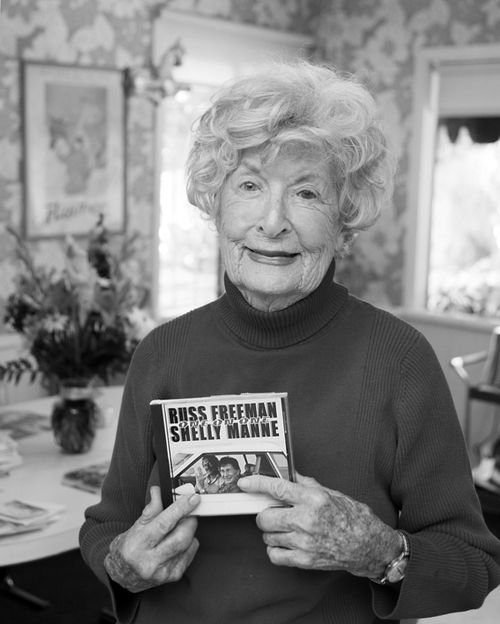 slideshow
Flip Manne, Shelly Manne's wife, was born May 3, 1921 in Vermont, rode horses and took dance lessons from an early age. To celebrate her 100th birthday today, I decided to reprise an interview I did with her in 2015 on her career and her drummer husband's. I've also added followup material that Flip provided several years ago.

As background, Flip moved from Vermont to New York in 1939 and eventually took a job dancing at the Roxy Theatre. She soon auditioned at Radio City Music Hall and won a position in the fabled Rockettes. Back then, they danced in four shows daily. She met her future husband, Shelly, in the early 1940s. Flip picks it up from here (happy birthday Flip!):

JazzWax: How did you meet your husband?

Flip Manne: World War II was in full swing, and the husband of one of my mates at Radio City Music Hall was going into the service. He played in the pit at the Music Hall and was one of the people who introduced Shelly to jazz. His wife threw her husband a going-away party and Shelly, who was already in the Coast Guard, came with a date. After we were introduced, he took her home and came back to the party. We started dating after that. He was funny and always at the center of things.

JW: How did you get that cool nick-name?

FM: When I was very young, I had several aunts named Florence, which is my birth name. They were all called Flo. For some reason I hated the name. My mother started calling me Flip Flop because I was always leaping around, long before I began taking dance classes. Eventually I dropped Flop.

JW: How did Shelly learn to play the drums?

FM: Shelly's father was in an administrative position at Radio City Music Hall. He had been a percussionist. As a result, Shelly grew up in the Music Hall. At one point he was even an elevator operator back stage. Billy Gladstone, the legendary drummer in the pit band, was a close family friend. One day when Shelly was in the orchestra room, he expressed an interest in the drum set. Billy showed him how to hold the sticks. He put a Count Basie record on and told Shelly to play. Then he left the room. That was how Shelly started. Then he sat in with various groups.

JW: Did he know how to read music?

FM: Not at first. He taught himself to read. Up until then he had thought he might go into sports. He was a New York City cross-country champion in high school and at some point represented an athletic club in a table tennis tournament. [Photo of Flip Manne, center, in an all dark rehearsal outfit]

JW: Did you go on the road with Shelly? FM: Oh sure. We were on the road with pianist Lou Stein and bassist Bob Carter, probably when they were all with Charlie Ventura and His Combo, in the late summer of '47. Bob Carter's real last name was Kahakalau. He was part Hawaiian. I was very fond of Lou's wife, Irene. She taught me to cook while we were in a hotel in Milwaukee. Trombonist Kay Winding and vocalist Buddy Stewart were on that band. That's where we first me Jackie and Roy. Shelly did their first album, Storyville Presents Jackie & Roy, in 1955.

JW: When did you and Shelly move to California?

FM: We moved out to Los Angeles in 1951. We bought a plot of land in Northridge, in the San Fernando Valley, which was all we could afford. We built a one-bedroom house. The area was lovely then—all walnut and citrus trees. We had horses, dogs, cats and a big garden. [Photo above of Shelly Manne in 1953]

JW: When Shelly was with Kenton, did you know vocalist June Christy?

FM: Yes. She had a terrible start as a kid. Her father was an alcoholic who deserted her mother when she was little. She said she started working in clubs when she was 12 or 13. She also said she hated being on stage in revealing gowns. Whenever possible, she wore suits or had gowns made with long sleeves. She was already going with Coop [Bob Cooper] when Shelly came on the band.

JW: Were you close with her?

FM: Not really. She didn't form close friendships with band wives. But she and Coop would come to dinner at our place after we moved out to the Valley. The critics really ran her down for winning polls when Stan was hot. They'd write things like, “How can June win over Billie, Sarah and Ella?," as though she had any control over it. They said she sang flat, which wasn't true, and sang terrible tunes, which she didn't control either.

JW: Whose band did Shelly like playing in most—Stan Kenton's or Woody Herman's?

FM: Stan's and Woody's bands were, of course, totally different. I never heard Shelly compare them. He liked both very much.

JW: Shelly was on drums in the Neal Hefti recording with Charlie Parker of Repetition in Carnegie Hall at the tail end of 1947. Were you there?

FM: I was. I remember that Charlie Parker was late, the band was playing, he walked in, picked up his horn and started playing without warming or anything.

JW: Which arrangers did Shelly dig most?

FM: Shelly was very fond of Neal Hefti. He admired him a lot. Also, Johnny Mandel. He loved Van Alexander and was on one of his early bands.

JW: What did Shelly think about the West Coast-East Coast jazz rivalry?

FM: Shelly wasn't happy with that. He was born in Manhattan, played everywhere, and thought that it was an artificial division.

JW: Why did Shelly start Shelly's Manne-Hole in 1960, at 1608 N. Cahuenga Blvd. until 1972, before relocating it to the Wilshire Blvd. location and closing it the following year?

FM: He started the club to have a place for everyone to play, including his groups. While he had [co-owner] Rudy Onderwyser there every night, Shelly enjoyed it. I was never thrilled with the idea.

FM: It took him away from home. He did make time to go to week-long horse shows several times a year with me—we both showed—and sometimes I was able to go to Europe or Japan with him.

JW: Shelly had a stiff sitting style behind the drums. Did he have back problems?

FM: He had extremely long legs and a very short body. He developed back trouble while on the road with Stan Kenton. One day he bent over to pick something up and sneezed. Something went out. His back bothered him a lot for years—that was before you'd see a chiropractor for such things. A doctor friend told him about one of the first acupuncturists to start a practice in L.A. We went to him and he worked on Shelly. The pain went away and never returned. All the doctors we had seen suggested a contraption for hanging yourself in a doorway or an eventual operation.

FM: I'm going to skip that one. It's too painful.

Here's The King Swings, with the same quintet...