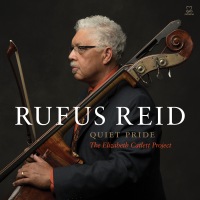 slideshow
His Five Movement Suite Pays Tribute to the Life and Work of Elizabeth Catlett, One of the Most Important African American Visual Artists of the 20th Century

The inspiration for the epic, large ensemble work, Quiet Pride was Reid’s fascination with the sculptural work of Elizabeth Catlett, the great African American artist and civil rights activist, whose works can be found in the collections of the White House, the Museum of Modern Art, and of private collectors such as Bill Cosby, Oprah Winfrey, and jazz impresario George Wein. “You know how you can spend hours in a gallery, just letting the images sink in? I found myself responding to the shapes and lines in Elizabeth’s work. While there is no ‘absolute’ correspondence, I do feel that she inspired me to mix my own shapes and lines,” explained Reid, whose suite movements are inspired by Catlett’s sculptures Glory, Mother & Child, Recognition, Singing Head, and Stargazer, each of which are pictured in the detailed CD booklet.

As a bassist, Rufus Reid’s signature sound has graced the music of countless jazz giants including Eddie Harris, Thad Jones & Mel Lewis, Stan Getz, Dexter Gordon, Benny Golson, J.J. Johnson, Jack DeJohnette, and Nancy Wilson. As an educator he is sought after internationally and is the author of the acclaimed instructional book and DVD, “The Evolving Bassist”– the definitive bible for every jazz bassist and the industry standard since 1974. He also served for twenty years as the Director of Jazz Studies and Performance Program at William Patterson University.

Upon retiring from William Patterson, Reid set about fulfilling his desire to compose. In short order, he began winning awards and commissions: the BMI Composers Workshop, Charlie Parker Jazz Composition Prize, two Chamber Music America’s New Works grants, The John Simon Guggenheim Memorial Foundation Fellowship for Composition, and the Mellon Jazz Living Legacy Award, to name but a few. His dream to compose for the large ensemble was made possible by his winning the prestigious Raymond and Beverly Sackler Composition Competition Prize in 2006 for his original four-movement suite, Quiet Pride. A fifth movement was completed and added in 2012, leading to this recording.

Of the recording process (which is nicely documented on the enhanced CD), Rufus explains, “It’s pretty amazing to have something in my subconscious of how I want a piece to sound. Then for really creative individuals to come in and render it and take it completely to another place that I couldn’t have even imagined — it’s thrilling. There were times I actually had goose bumps and said ‘Damn, I really wrote this!’ ”

Drummer/composer, Dennis Mackrel (Vanguard Jazz Orchestra, Count Basie Orchestra), conducts the orchestra. Akira Tana, Reid’s co-producer and longtime colleague, comments, “I think we’re hearing the fruits of his life in music because you hear all the influences of all the different groups he’s played with and it’s coming out in his writing. It’s something very special.”

Noted jazz percussionist Francisco Mora-Catlett (Sun Ra, Max Roach’s M’Boom) initially connected his mother with Reid. Elizabeth was genuinely surprised to hear such an ambitious musical project inspired by her sculptures. She was delighted to learn of and endorse the multi-disciplinary program for universities exploring “how art inspires art.” (Reid coordinates special programs in which multiple university departments (art, women’s studies, black studies, and music,) collaborate to bring in gallery showings of Elizabeth Catlett’s sculptures and university orchestra performances of Reid’s Quiet Pride, as conducted by Rufus Reid. Such programs have happened so far at The University of Connecticut at Storrs, CT, in Baton Rouge at the Shaw Center for the Arts with the Louisiana State University Jazz Ensemble and at Bucknell University.

“My purpose in recording Quiet Pride - The Elizabeth Catlett Project was to create a definitive, professional recording, for people who love art and who love music, explains Rufus. It will also be an excellent educational tool as I continue my residencies and performances at colleges and universities internationally. Quiet Pride has enriched my life about what I do and why I do it.”

Grammy-winning journalist Bob Blumenthal, who provides the insightful liner notes, comments that this music comes from “a life lived at the highest level of creativity and an undimmed willingness to face and meet new challenges.