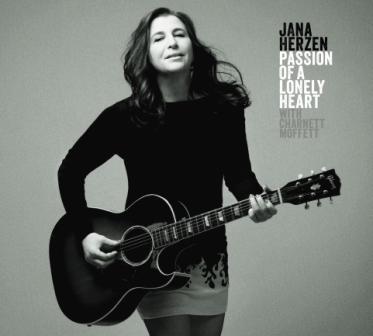 Many jazz aficionados only know Jana Herzen as the founder and president of the acclaimed Motéma Music record label. Under her stewardship, Motéma has advocated for visionaries Randy Weston, Monty Alexander, Geri Allen, Rene Marie, Gregory Porter and dozens of other dynamic and virtuosic composer/performers. What many may not realize, however, is that Ms. Herzen, whose initial professional life was in the theater, is a seasoned performer and instrumentalist with quite a talent for writing and performing.

In fact, the now multi-Grammy nominated Motéma label initially took root as an outlet for Herzen’s own debut recording, Soup’s on Fire. That all-original set of jazz-tinged folk, rock and worldbeat music, gained much praise for its musicality, originality and emotional depth. But Herzen’s life as a record label executive increasingly took the foreground in her life as she built her label, and it’s only now, on the dawn of Motéma’s tenth anniversary of ‘promoting artists of power an distinction’, that Herzen will at last release a new album of her own powerful and distinctive music. Her sophomore release, Passion of a Lonely Heart, will street on October 16th.

Throughout ten action-packed years of building Motéma – which now boasts three Grammy nominations and a catalog of close to 100 CDs by over 40 critically acclaimed artists – Herzen has been a devoted label leader, but she also never lost sight of her own artistry. She continued to perform, write and record, and is happy at last to share some of the fruits of her labors on Passion of a Lonely Heart, a quiet duo project she recorded ‘live in the studio,’ with esteemed bassist (and Motéma label mate) Charnett Moffett, whose stellar resume includes work with McCoy Tyner, Wynton Marsalis and Ornette Coleman, as well as vocalists Harry Connick, Jr., Anita Baker and, recently, Melody Gardot.

“Jana’s a fabulous songwriter who has great compositions with interesting structures,” says Moffett, who met Herzen one night after performing with Stanley Jordan at the Iridium jazz club in New York City. “Learning Jana’s music forced me play in a different style and concept that was unusual for me to experience.”

Though she plays mainly jazz on Passion of a Lonely Heart, Herzen’s influences range from Maria Muldaur, Leonard Cohen and Bob Marley to Miles Davis, Joe Pass and Leonard Bernstein and beyond. Much like the label that she runs, she has a penchant for crossing genres. “There aren’t that many singer-songwriter-guitarists in the jazz idiom,” she comments, “but there are some great examples – such as John Pizzarelli, George Benson or Raul Midon. “ Herzen humbly declines comparison with those master guitarists in regards to her instrumental chops, but her musicality and deep understanding of the jazz idiom are as apparent in this recording as they are in her artistic direction of Motéma.

Herzen’s first fifteen years of professional life were spent in theater, but eventually she returned to music, which was her first true love. She instinctively improvised vocal harmonies from a very young age, studied piano from age five to twelve, learned clarinet and harmonica by ear, and then picked up the guitar in her early teens, and has never put it down. She now plays bass, kalimba, penny whistle, percussion, and didjeridu – though she cites voice is her primary ‘ax’, with guitar as a close second.

It was a close encounter with the 1976 Pablo recording, Fitzgerald & Pass… Again, which initially sparked Herzen’s now somewhat legendary love affair with jazz – and for that reason she dedicates Passion of a Lonely Heart to Ella and Joe. “As a teenager, I spent hours and hours with my headphones on; breaking my brain trying to deconstruct the chord/melody structures that Pass was playing. And at the same time, I was enchanted with the pure joy of Ella in full swing. It was she who inspired me to explore scat singing, which really opened up my internal feel for chord structure.”

Like the much loved Fitzgerald and Pass recordings, or the classic Sarah + 2 (Roulette,1962), Herzen and Moffett’s interactions on Passion of a Lonely Heart have a conversational feel that’s just right for a quiet Sunday afternoon. Herzen’s guitar comping and understated leads are complimented by the remarkably pianistic playing of Moffett, who simultaneously articulates rhythm, harmony and lead lines on his bass throughout the set with a great deal of grace.

The palpable chemistry of this duo is evident as they playfully swing through Henry Nemo’s “‘Tis Autumn” and explore such varied territory as Chick Corea’s “Spain (I Remember)” (complete with ebb and flow flourishes of flamenco guitar), a lightly sexy version of the Nina Simone classic “My Baby Just Cares for Me” and the soulful Cesaria Evora gem “Sodade,” which features lyrics in a Cabo Verdian dialect of Portuguese.

Herzen’s seven originals travel with style through many continents and moods in their explorations of the passions of the human heart. The jaunty “Bali Holiday” calls on 1930s jazz changes to convey a wistful modern romance; the bluesy “Secrets are Safe With Me”, as reprised from her first release, simmers with the menace of a femme fatale on the prowl; “Night Blooming Jasmine,” with its hints of Paris in the ‘60s, is a beautiful ballad that sounds like it could have come out of the Chet Baker songbook; and the dramatic title track, “Passion of a Lonely Heart,” often evokes an “I must have heard this classic before” response from new listeners.

Herzen is much under the spell of the writing of Leonard Cohen, Joni Mitchell, Paul Simon, Randy Newman, Tom Waits, Lennon & McCartney, Harold Arlen, Stephen Sondheim, Brecht & Weill and William Shakespeare. “I love a musical poet who paints pictures with words and tones and rhythm to take you on a deep emotional ride, or a fun and clever jaunt. A great song is just like a mini play,” says the one-time dramaturge.” “It’s got to have an emotional arc, and you can’t expect the magic to show up unless you deal in completely intimate truths. Songs that feel dangerous to sing often resonate most with the other hearts in the room. It’s a powerful phenomenon. The personal becomes universal.”

Herzen’s extensive travels and life experiences give her much to write about, and her easy stage presence comes from years of performing in surprisingly varied circumstances. She’s played internationally as a solo artist and with Afro-pop and reggae bands; has performed in and directed off-Broadway musicals; and she’s as comfortable jamming around campfires with Aboriginal tribesmen as she is performing at major state functions. She once had the opportunity to perform for Nelson Mandela at the Paris Chamber of Commerce. An unusual breed, Herzen is a polymath who brings an instinctive creativity to all her dealings, whether it be working as a dramaturge for the acclaimed MCC Theater in Manhattan (an award-winning company she helped to found in the 1980s that still thrives today), leading the maverick Harlem-based Motéma label to success, or traveling the world as a troubadour. “The way I see it, life is really just one big song we are all collectively writing. One giant jazz improv, as it were.”

Herzen’s improvisational nature led to this duo project. “I first set out to do a full band project, but as I was rehearsing one day with Moffett I noticed a certain magic to the sound of my voice, with just bass and guitar, and I thought, why not just record that way? So we did.” To provide an objective ear in the sessions, Herzen and Moffett brought on the noted manager/producer, Mary Ann Topper. “Mary Ann has amazing ears – and she is notoriously direct – so I figured she would be a great ally in the studio, and she was! Both she and Charnett made great contributions to the sound and arrangements on this record, as did my dear engineer, Jay Mark, and our mastering engineer, Alan Tucker. I owe much thanks to them all, as I do to the Motéma staff; and to the many Motéma artists who’ve been encouraging me to get out there again with my songs. “

In closing, she comments, “The artists I’ve been lucky enough to sign to Motéma are amazing people. I’m not sure exactly why fate led me to have a record label in Harlem, and to sign these powerhouse performers, but I do know it’s an incredible honor. I often tell people ‘I’m not really in the music business; I’m in the inspiration business.’ I sign artists who inspire me, and I promote them so they can inspire others. I can only hope that my music will do the same. “