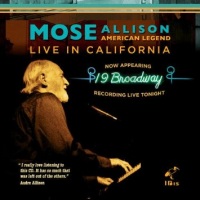 slideshow
If there's an artistic link between jazz and blues-rock, then Mose Allison is one of the early bridges. In the late 1950s and early '60s, the jazz pianist from Tippo, Miss., had a remarkably casual, original blues style that touched many rockers. Mose's singing voice was just as seductive as his playing—more hick poet than bop or pop crooner, and his original songs expressed a witty, off-key rural restlessness that called life as he saw it.

Though Mose's songs have a barefoot quality, he's no bumpkin. Mose played and recorded with Bob Brookmeyer, Al Cohn, Zoot Sims, Stan Getz, Addison Farmer, Phil Woods, Teddy Charles, Pepper Adams, Bill Crow and many other jazz swingers of the 1950s. But Mose's style has always been deceptive. At first blush, his lyrics sound as if he's just messing around. In truth, they're rooted in urban beat poets and writers and the humor of New Yorker-style cartoons that tickle social trends.

As a result, Mose's songs come across as tall tales set to music with sly insights and sardonic twists . The construction of his songs was slightly lopsided and child-like, closest perhaps to Thelonious Monk's quirky approach. But the more you listen to Mose, the more you come to appreciate his dry humor and genius. Despite Mose's jagged edges and halting attack, there's plenty of art in there.

By 1970, the Who covered Mose's Young Man Blues in concert at Leeds, which was released later that year as an album. The Rolling Stones, Jimi Hendrix, Tom Waits all were inspired by Mose, whose songs have been covered by Elvis Costello, Bonnie Rait, Norah Jones, Van Morrison and others. What all of these artists heard was Mose's authenticity, hipness and humble insurrection.

Today, Mose, 87, is retired from performing, but a new album he recorded live in 2006 has just been released and is a fond reminder of how superb Mose was in clubs. The album—Mose Allison: American Legend, Live in California— was recorded at 19 Broadway in Fairfax Calif. It features Mose singing and accompanying himself on piano, with Bill Douglass on bass and Pete Magadini on drums. The sound of the recording is superb, and Mose is in peak form. The album's 19 tracks feature Mose as songwriter (I Don't Want Much, Certified Senior Citizen), song interpreter (Do Nothin' Till You Hear From Me) and piano-jazz technician (the instrumental No Name).

But most of all, the album is like sitting down with an old friend before a snapping fireplace to whittle sticks and talk plainly about great authors, architects and painters. What we hear in Mose is a blend of country-road yarns and cosmopolitan craft.