Last Tuesday, HighNote Records furnished two new CD's, each by established veterans of the jazz scene. Look on the back of just about any classic Blue Note album from the 60s, and you're likely to see Joe Chambers' name listed as the drummer. And while there's no notable drum solos to be found on those records, his sweet, subtle style helped to shape the Blue Note Sound as much as Rudy Van Gelder's production and the visionary music of leaders like Andrew Hill, Bobby Hutcherson, Joe Henderson and Wayne Shorter. Just to pluck one of hundreds of example, listen to Shorter's “Adam's Apple" how Chamber's kit work going in tandem with the bass line really drives that song without being overpowering. Chambers has since gained notice as a vibes and marimba, player, too. Even after this and serving as an original member of Max Roach's M'Boom ensemble, Chambers has churned out only a handful of records as a leader.

Trumpeter Wallace Roney, on the other hand, has fourteen studio albums to his credit since 1987. One of the last trumpet players in Art Blakey's Jazz Messengers, he also added a second trumpet to bolster Miles Davis' faltering horn on the latter's swan song Miles and Quincy: Live At Montreux. A few years later after Miles' death, Roney took the envious role as Miles' de facto fill-in for that great Second Quintet for the all-star eulogy affair A Tribute To Miles. Since then, Roney's playing style has been closely identified with Miles', and often, wrongly dismissed for that reason. His own work reveals a performer who looks forward beyond what his inspirations did as much as paying tribute to the leading lights of yesteryear.

Below we take a look at these two releases by long time veterans who prove that their music is still quite relevant: 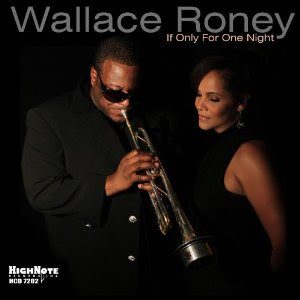 Wallace Roney If Only For One Night

A look at the title, the inclusion of songs by Janet Jackson and Brenda Russell, and a glance at the cover photo made me certain that Wallace Roney had just put out a “quiet storm" record, but thankfully, the music inside makes better use of his abilities. This being his first live album, Roney makes If Only One Night an introduction to an artist who possesses much more complexity than some Miles hack. Roney's quintet is rounded out by names who might not jump out to most, but they do the job and then some. Roney's brother Antoine handles all the reeds, Aruan Ortiz plays mostly piano but dips into the electric piano and synth when called for. Kust Abadey mans the drums and up-and-coming Rahsaan Carter is on bass.

To be sure, Roney's own “Metropolis" is bound to conjure up comparisons to Live At The Plugged Nickel, but there's probably not many trumpeters alive today who can blow those lines that Roney does, nimbly straddling the line between tonal and atonal, holding notes and punctuating other at the perfect spots. Even more impressive are the massive chops on display during on “Only With You," where the tone, control and character of his horn all push the needle. Herbie Hancock's “I Have A Dream," an underrated, elegiac composition of his from 1969's The Prisoner is fully explored on this set: Roney, his brother and Ortiz all contribute evocative solos and the songs travels over terrain both acoustic and electronic. “Let's Wait A While" is rendered straight, but is powered by the pure emotion of Roney's trumpet. “Quadrant" is a icy-cool synth groove on a model frame that's wide open for Roney's searing solo.

The wide-ranging facets heard on this album is held together by Roney's nuanced and explosive trumpet. If you are looking to start up a Wallace Roney record collection, If Only For One Night is a pretty good way to do it.

Purchase: Wallace Roney - If Only For One Night

His first album in four years and his second for the Savant label (sister label of HighNote), Joe Chambers' album title pays homage to Max Roach and Horace Silver, one for whom he was closely associated with directly (Roach) and the other with whom he was closely associated with that person's well-known sidemen (Silver). For this album full of pure post-bop goodness, Chambers himself chooses prominent sideman of the current generation, such as Xavier Davis (piano) and Eric Alexander (tenor saxophone).

As you might expect, there are Horace and Max tunes in here---three from Roach, one from Silver---but Chambers also tackles tunes from Shorter, Monk and Kenny Dorham, as well as his own originals. The straightforward arrangements on these songs don't offer exciting new revelations, the treasures of this record are found in the firm execution and quiet confidence of the musicians involved. Chambers the Vibes Player reminds me some of latter period Bobby Hutcherson, one of the many cats Chambers contributed his drumming for on classic records. And Chambers can still drum like a champ; his style remains in the same vicinity as Roy Haynes. Nicole Guiland contributes vocals for a couple of tracks, and if torch singing is your thing, there's nothing not to like about that. The best cover of the batch is Marcus Miller's “Portia," first appearing on Miles Davis' Tutu. Stripped of its over-produced veneer, Chambers finds the beauty of its mysterious, moody melody (and Xavier Davis contributes a fine piano solo).

In contrast to Wallace Roney's CD cover, Chambers' looks just like one of this classic Blue Note album covers. The other difference is that the music roughly matches the cover. Good thing.

Recording Something Else! Michael Ricci