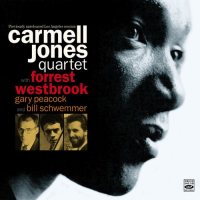 slideshow
Having proved himself in the jazz milieu of Kansas City, in 1960 the 24-year-old trumpeter Carmell Jones (1936-1996) quit his job as a railroad porter and moved to Los Angeles in search of full-time work in music. He was quick to impress bassist Red Mitchell, alto saxophonist Bud Shank and tenor saxophonist Harold Land. His recordings with them, with Gerald Wilson’s big band, and later with Art Blakey were to bring him attention and acclaim. Shortly after his arrival in L.A., Jones worked in a quartet with other emerging musicians—pianist Forrest Westbrook, bassist Gary Peacock and drummer Bill Schwemmer. Westbrook’s apartment served as a studio where he recorded their rehearsals on a reel-to-reel stereo tape machine. For 55 years, those tapes were unheard by anyone but the musicians and Westbrook’s family and friends.

Following Westbrook’s death last year at 87, his daughter Leslie told Jordi Pujol of Fresh Sound Records about the tapes. The result is an album that finds Jones with the imagination and verve that led jazz expert John William Hardy, photographer William Claxton and critic Joachim-Ernst Berendt to issue enthusiastic reports about him after they heard him in Kansas City. Now, we hear Jones in his early west coast days, eleven months before The Remarkable Carmell Jones, his first released Pacific Jazz album as a leader.

In common with a legion of other young trumpeters in the 1950s and 1960s, Jones’s full sound and dazzling technique owed much to Clifford Brown. If he was inclined to an excess of finger-flicking grace notes, he balanced that manifestation of self-consciousness or nervousness with symmetry of phrasing that could be stunning on ballads. The prime example of his lyricism here is on the alternate take of “Willow Weep for Me, in which he uses a cup mute and overflows the Ann Ronell song with blues feeling. With the horn open, the warmth of his tone is remarkable on the first take of “Willow,” “Baubles, Bangles and Beads” and two takes each of “If I Love Again;” “Ruby,” Heinz Roemheld’s 1953 hit from the film Ruby Gentry; and Harold Arlen’s “For Every Man There’s a Woman.”

Peacock, at 25 a veteran of work with Shank, Don Ellis, Shorty Rogers, Barney Kessel and Paul Horn, was deep into the characteristics of technique, timekeeping and harmonic mastery that were to take him to the top levels of jazz, including his three decades in the Keith Jarrett Trio. “His development,” Shank told me in 1998, “was phenomenal. He turned into one of the most creative bass players that ever happened.” Drummer Schwemmer, a friend of Peackock, has a lower profile. His time concept melds nicely with Peacock’s here, his cymbal work is noteworthy, and he has effective exchanges of four-bar phrases on several tracks. He evidently left active playing after the 1960s.

Westbrook’s solos and accompaniments shine throughout the album. In that relaxed second take of “Willow Weep for Me,” he negotiates piquant intervals in the solo melody he creates. He simulates bent notes in a manner reminiscent of Jimmy Rowles, a contemporary whose work Westbrook no doubt knew. The rhythm section plays “Airegin” without Jones. Westbrook is astonishing on the Sonny Rollins tune. He brings together bent notes, unconventional intervals, keyboard touch in a range from delicate to dynamic, and more. His headlong solo has stylistic allusions to Bud Powell and Lennie Tristano. Most of all, it communicates the sense of joy and discovery that illuminates a performance when a player is so inspired that it seems the music is showing the way, taking him along for the ride.

There are other tapes in the Westbrook cache of jam session and rehearsal recordings. This CD is a valuable glimpse into Carmell Jones’s early musical life. For many it will be a surprising introduction to Westbrook. It is encouraging to think that more music of this quality may remain to be discovered.