Modern Jacobite represents jazz saxophonist Tommy Smith’s latest and most emphatic foray into the field of contemporary classical music. At its heart is Jacobite, an epic painting in sound vividly brought to life by the world-renowned BBC Scottish Symphony Orchestra. 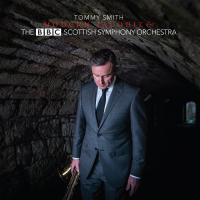 slideshow
Many jazz composers and musicians now work comfortably across lines of demarcation between classical music and jazz forms. The outcome over the years has largely been a victory of good sense over tender sensibilities, with much fulfilling music to enjoy. Now, Scots tenor saxophonist Tommy Smith, with the 80-piece BBC Scottish Symphony Orchestra, offer music lovers a full-bodied listening experience on 'Modern Jacobite'.

Modern Jacobite (released in the USA 2nd September 2016) opens with Tommy Smith’s personal interpretation of Rachmaninov’s ‘Vocalise’. His own thirty- minute symphonic work Jacobite featuring the full might of the BBC Scottish Symphony Orchestra takes centre stage, while a coda is provided by Smith’s re-imagining of Chick Corea's Children’s Songs.

Smith’s highly original composition “Jacobite" is a powerful musical commentary on the state of the Scottish nation in the midst of far-reaching change. It is complex, absorbing and passionate, and articulates the strongest feelings aroused by matters of liberty, equality and justice for all.

Tommy Smith is an artist with a deeply held belief in the freedom of personal, artistic and creative expression. That belief is underpinned by a strong sense of identity as a Scot, and as a self-directed, self-reliant musician. Such an artist is by nature, a risk-taker. It is perhaps bolder still to take up core values and convictions, and incorporate them into a piece of art.

The seeds of the symphonic work Jacobite were sown in the fertile ground of the 2014 Scottish independence referendum. Smith wrote a long poem called “Independency" prior to the referendum, and it took him about six months to write. He spent long hours reading and absorbing passages from Scottish history, and the genesis of Jacobite came out of Independency, which he eventually shared widely on social media.

The CD begins with a shimmering interpretation of Rachmaninoff’s “Vocalise," in which Smith’s saxophone emotes a range of complex feelings in a devastatingly romantic orchestration. “Vocalise" is among the best loved of the composer’s famous Fourteen Songs, and Smith brings the subtlest nuances of improvisation to bear upon its melodic richness.

Jacobite is an enthralling piece, and keen listeners may detect elements of Scottish folk melody as one of several points of departure in this dynamic work. Smith uses every part of the orchestra to tell his story, and colors his composition with delicate touches of improvisation. However, his overarching aim with Jacobite was to conceive of something subtle, organic and expressive.

“Jacobite is a piece of modern music that features saxophone and many other soloists in the orchestra, so it's quite unconventional," explains Smith. “It’s certainly not a full blown concerto, especially when the first entrance of the saxophone appears after two and a half minutes of orchestral texture and solos from cello and flute. The saxophone acts as the main narrator throughout the piece, embodying a purely improvisational quality to all the thematic material.

The third element is a portmanteau of compositions by Chick Corea, entitled simply, Children’s Songs. It consists of Corea’s original tunes alternating with Smith’s re-imaginings of Corea’s childhood memoirs. These variations are delivered with improvisational verve, and linked by the connective tissue of new music composed by Tommy Smith.

Modern Jacobite may have been inspired by Scotland’s 2014 referendum on independence, but it is also significant as an artist’s response to the challenges facing independent creativity and musical freedom. Perhaps more than that, it uses the language of music to express an artist’s sense of place in the world, informed by identity and enriched by a deep understanding of history. The outcome is a high watermark in the accomplished career of one of the Europe’s leading jazz musicians.

Modern Jacobite by Tommy Smith (tenor saxophone) with the BBC Scottish Symphony Orchestra (BBCSSO) conducted by Clark Rundell with orchestrations by Tommy Smith was Recorded on 28th and 29th May 2015 at City Halls, Glasgow. Mixed on 25th and 26th October at Rainbow Studios in Oslo by Tommy Smith and Jan Erik Kongshaug.

For information about submissions from Modern Jacobite to the 2017 Grammys, click here.