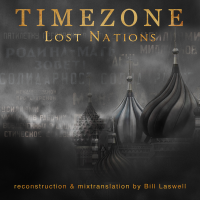 Timezone is world beat music that emerged during the collapse of the Berlin Wall and the Soviet Union. Artists from Moscow and Humboldt County, California, have built on ethnic diversity and bilingualism to cogenerate an exciting new music. Interwoven with rock, reggae and African rhythms. This decade-long musical journey began in the early 80's, before Gorbachev and Chernobyl. Timezone moved under the guidance of Jon Humboldt Gates, a Russian speaking guitarist and songwriter from Northern California. The first Timezone sessions were inspired by two blind Russian musicians who Gates met and played music with during several trips to the city of Kiev, in the Ukraine. In ‘90, Gates took the Timezone north to Moscow where the recordings began.

The Lost Nations album evolved as studio tapes and were flown back and forth across an 11 hour time difference between Moscow and Northern California. Musicians from Timezone East and Timezone West eventually co-created the Timezone sound from the far sides of the world. Nineteen artists participated in the project. The recordings were dramatically interrupted in August of 91 when tanks rolled into Moscow and thousands of people went to the barricades to protest. The Russian recordings were finally completed in December of ‘91, the same week the Soviet Union was dissolved. The American sessions were finished in ’92, and mixed at Russian Hill Recording Studios in San Francisco.... In 93, backed by the Performing Arts Center at Humboldt State University, Gates raised money through the Soros Foundation to fly seven of the Russian musicians to California where they rehearsed with their American counterparts for one month. Following those first face to face sessions, 18 artists played a historic, three night concert series at HSU's Van Duzer Theater that was captured on video. The live concerts included several new Timezone songs that were co-written, but never recorded in studios.

This release is the result of Bill Laswell's mix translation and re-imaging of the original recordings (2014). Continuing his full-length-album-remix concepts, others have included Bob Marley, Miles Davis, Carlos Santana and on and on…. Future Past - Past Future.

ABOUT THE INCUNABULA DIGITAL SERIES

The Incunabula Series promises to present rare and unique, one time only captured events, in some cases originally experienced by a fortunate few and recover unusual, lost until now studio recordings. Documenting as far back as the early 80s up to present time. Moments seldom heard or experienced by anyone.