A collection of original songs and innovative arrangements of jazz standards, crafted to bring out hidden meanings. 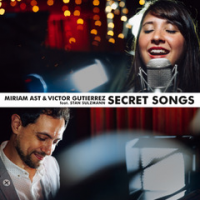 Recently winning the Best Vocalist award at the Bucharest International Jazz Competition 2017 and reaching the semi-final of the Shure Montreux Jazz Voice Competition in the same year, Miriam Ast cites artists such as Diana Krall, Sarah Vaughan, Jamie Cullum, Norma Winstone and Kurt Elling as major influences. Initially gaining a BA in singing and saxophone in Mainz, Germany before graduating from the Royal Academy with an MA distinction, Ast studied under Welsh jazz singer Nia Lynn, composer and arranger Pete Churchill and the British jazz icon Norma Winstone. She is now inspiring the next generation of up and coming artists as a senior lecturer at Leeds College of Music. As part of the acclaimed London Vocal Project, she has performed at venues such as the 606 Club, Pizza Express Jazz Club, the EFG London Jazz Festival and the Cambridge International Jazz Festival. Previously, Miriam was a member of the prestigious Bundesjazzorchester (the German National Youth Jazz Orchestra), and in September 2013 was awarded the Young German Jazz Award Osnabrück with the band The Ropesh.

Originally from Madrid, Victor Gutierrez is an award winning pianist, composer and arranger, a Summa Cum Laude graduate at Berklee College of Music, and a Masters licentiate with distinction at London’s Royal Academy of Music. He has performed with luminaries such as the multiple Grammy award winning Javier Limón, Norma Winstone, Joe Locke, Terri Lyne Carrington and Yuzuka Takemoto among many others. Gutierrez has toured venues and festivals in North America, Europe, and Japan, in places such as the EFG London Jazz Festival, Smalls Jazz Club, Berklee Performance Center, New York Arts Festival and Mandala Tokyo. As a composer he has written the original soundtrack for the short movie ‘Airless’ (presented at the NYC film festival), and received the Alex Ulanowsky and Herb Pomeroy Awards in Jazz Composition. Gutierrez’s diverse influences range from classical music to contemporary jazz, citing the lyricism of Bill Evans, Michel Petrucciani and Keith Jarrett, to the rhythmic explorations of John Taylor or Brad Mehldau as inspiration.

Ast and Gutierrez met during their studies at the Royal Academy of Music in London in 2015. Right from the beginning they shared a musical chemistry, and their latest project Secret Songs has become a very personal album. The two artists play mostly their own compositions, together with a few special arrangements of well-known jazz standards. Miriam Ast‘s vocals and Victor Gutierrez‘s piano playing enter into an intense musical dialogue that is characterized by warm and lyrical sounds, experimental and free-form passages, and virtuoso improvisations. Ast employs her voice like a true musical instrument, knowing when to caress and when to emphasise. Her brilliant scat singing is complemented on some pieces by the distinctive intonations of British saxophonist Stan Sulzmann, a player who also serves up nimble and impressive duets with the pianist Gutierrez. A veteran of the British jazz scene, Stan Sulzmann has played with greats like Kenny Wheeler, Michael Brecker and Gil Evans. He is one of the duo‘s London instructors, and they have dedicated three compositions on the album to him. With his exciting improvisations and lively interactions with both vocals and piano, he has enriched the works enormously. On all of these pieces, as well as those containing lyrics, Ast and Gutierrez focus on melody and harmony, telling stories of emotional intensity and urgency. The recordings have been mixed,mastered and produced by the four time Grammy-winning engineer Jeremy Loucas at New York City’s Sears Studios.

Secret Songs is a refreshing and unique take on vocal jazz, retaining the pure, minimalist nature of a duo, and adding complex and imaginative layers of experimentation through compositional and harmonic skill. Forthcoming on Mons records, Ast and Gutierrez have enabled the revered German label to release an important and essential jazz release for summer 2018.