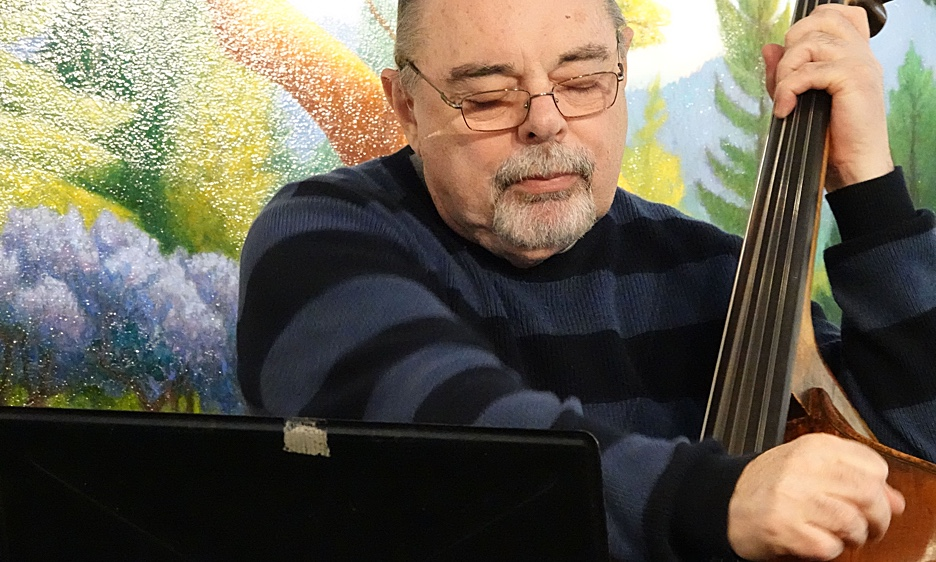 SOURCE: ALL ABOUT JAZZ PUBLICITY
February 19, 2021
Sign in to view read count

“When I was 12 my father introduced me to Scott LaFaro and when my Dad asked me, ‘what do you want to do?’ I pointed at Scott and said, ’that,’” says jazz bassist/producer Rick Kilburn. “The pursuit of music is basically the pursuit of oneself...a very spiritual undertaking,” reflects the bassist. “I strive to occupy my physical body with my spirit body at a minimum ratio of 51% spirit, to 50% physical body. That’s a good starting point to strive for. The spirit runs the show and the higher the spirit percentage, the better. So you do what you can to achieve that goal.”

Past DownBeat magazine writer/critic contributor and Canadian jazz guitarist Kerilie McDowall has been awarded finalist status after being invited to Hollywood’s jellyFEST Film Festival for her recent short film entitled, In the Zone: Rick Kilburn.

Released in March 2020, from her work for the past five years as a volunteer community television director and TV host for Nanaimo’s Shaw Spotlight, the made-for-TV/YouTube jazz mini-documentary film features Qualicum, BC, multi-award-winning jazz bassist, arranger, and producer Rick Kilburn. The short first received an Honorable Mention at Hollywood’s Independent Shorts Awards and afterward, director/producer McDowall received an invite to the jellyFEST Film Festival. The mini-doc was also selected by the Montreal Independent Film Festival.

Praised by Guitar Player magazine as, “a very talented musician,” filmmaker McDowall is a former Vancouver jazz guitarist and was a live jazz radio host/producer/engineer for 17 years. Her US-award-winning radio jazz podcast, Rhythm’a’ning was #1 on Google through Player FM during 2013-2015. McDowall is a current Canadian Polaris Music Prize juror, a recent JUNO Awards judge, and was a critic for the DownBeat Critics Poll from 2016-20. She enjoys teaching the guitar, and experiments with composing and new hobbies like modern art and baking.

“It is thanks to Cameron McLean, Todd Jones, and the Shaw Spotlight team that I had the opportunity to create this film and it’s with grateful thanks to them that the short was released just before prohibitive restrictions were in place in Canada due to COVID-19,” says McDowall. “The Shaw Spotlight team has been like a second family to me. Working with Shaw mentor Producer Todd Jones and the team has been a very valuable experience allowing me to develop my filmmaking, directing, producing, and television hosting skills.”

Canada’s Rick Kilburn, a former New York City resident, has received four Canadian JUNO awards, has formerly shortlisted for a Grammy, and has received other west and east coast awards for his extensive work with musicians as a jazz record producer. As a bassist, he has worked with the elite of the jazz world including Dave Brubeck, Chet Baker, Diana Krall, Paul Desmond, Lionel Hampton, Joe Lovano, Kenny Werner, JoAnne Brackeen, Mose Allison, and countless others. Always with a recording project on the go as a record producer, bassist Kilburn performs currently through live streaming and online events. The short film documents Kilburn’s life and includes solo jazz improvisation, film clips of Kilburn performing, photographs, and stories.

An avid golfer, Kilburn jokes a lot in the short and compares playing the bass to golf. “It’s worse than golf actually. It’s kind of a love-hate relationship… I just close my eyes and go—like abstract painting.”

Director McDowall was initially inspired by filmmaker Director Judy Chaikin’s jazz documentary film, The Girls in The Band, and it led to her having the desire to experiment with local opportunities in filmmaking, television directing, and TV hosting. She has had many jazz and film mentors along the way and is inspired by Kilburn himself. ”Rick passes along deeply sensitive wisdom, and over the years amongst many Canadian interviews, he remains as one of my favorites. He is one of the most clever bassist and producers around. He has passed along masterful knowledge and has been admirable during our friendship working on this film over recent years. I created this short film during moments in my spare time in 2019 while running a business and I am thankful that he and his family were ultra-patient with the ten-month-long filmmaking process. It’s an uplifting and positive story that provides a temporary escape from too much overwhelming news out there. Explore Kilburn’s jazz world. It’s inter-generational and inspiring,” says McDowall.