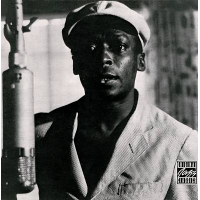 slideshow
Admittedly, I'm a Miles Davis purist when it comes to his mid-1950s recordings. This means I'm not especially big on Davis in crowds. I find his sessions with vibes, trombones and saxophones unnecessarily choked and distracting from the essential beauty and lyricism of his horn. I even feel that John Coltrane's tenor saxophone is often overwrought and claustrophobic on these mid-1950s dates. For me, perfection is Davis with just a trio.

For whatever reason, Davis recorded only three quartet sessions in the early and mid-1950s: Blue Haze with John Lewis (p), Percy Heath (b) and Max Roach (d) was cut in 1953 while a quartet session for Blue Note with Horace Silver (p), Percy Heath (b) and Art Blakey (d) was done in 1954. But the finest expression of the quartet format was The Musings of Miles, which featured Garland with Oscar Pettiford (b) and Philly Joe Jones (d). The album was recorded on June 7, 1955 and it was was Davis's first 12-inch LP (the others had been 10-inch pressings).

Davis's horn on Musings of Miles is precious and pure, like a crystal clear day or a carafe of spring water. Garland is equally exquisite and delicate, framing Davis's every idea. Garland was a bluesy exponent of Ahmad Jamal's spare approach on the keyboard, favoring the upper register for improvised lines and block chord in the middle to make bold statements.

Davis employed Garland when he failed to persuade Jamal to join his band in 1955. As Ahmad told me, both were leaders back then and it didn't seem to make much sense for him to join Davis's group when Davis could just as well join his trio. On Musings of Miles—Garland's first album with Davis—Will You Still Be Mine and Gal in Calico were Jamal lifts. In many ways, it's a shame Davis and the Ahmad Jamal Trio never had an opportunity to record together.

The Musings of Miles is a regal album expressing Davis's emerging beauty and keen sense of taste and discretion. Like Garland, Davis understood the balance between sound and space. He also understood that sensuality mattered more than sheer power—or sheets of sound.

JazzWax clip: Pour yourself a cup of coffee or tea, sit back and listen to the entire Musings of Miles. Dig what Garland is doing as Davis plays. His chord voicings are so pretty...