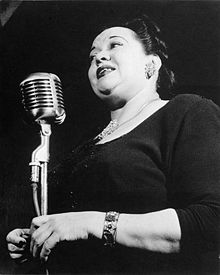 In the 1930s, as the country struggled through the Depression, households buckled under the strain of poverty and the creeping fear of darkening world events. What kept most people from being swallowed by nagging pessimism and despair was the radio. The dramas and music that came over the airwaves provided much-needed relief from anxiety and worry. The first and finest female singing voice during these bleak years was Mildred Bailey. A warm and upbeat swing-era beacon, she not only forged breaks for singers like Bing Crosby but also influenced a generation of singers who followed, including Frank Sinatra, Tony Bennett and Rosemary Clooney.

Bailey is credited with being the first female big-band vocalist. She was the earliest female vocalist to sing ahead of and behind the beat and did so with relaxed charm (Ivie Anderson began recording with Duke Ellington in 1932). Born in 1903, Bailey grew up on the Coeur d'Alene Reservation in Idaho up until she was 13. Her mother was part Native-American. Then the family moved to Spokane, Wash., where her younger brother, Al Rinker, met Bing Crosby.

Bailey had a musical childhood and, in the early 1920s, she headed down to Los Angeles for work opportunities. Her brother and Crosby came down mid-decade, and Bailey helped them get their start with Paul Whiteman in 1926 as two of the three Rhythm Boys (Harry Barris was the third).

Bailey joined the Whiteman Orchestra at 28 in 1929 thanks to her brother and Crosby, who engineered an audition at a Los Angeles party. Back then, a woman singing in a dance band was unheard of.

Inspired by Bessie Smith, Bailey sounded both white and black, which allowed her popularity to grow on the radio, since her voice appealed to virtually everyone. Bailey left Whiteman in 1933 after marrying xylophonist Red Norvo. They moved to New York and recorded extensively in the 1930s, but the couple divorced in 1942, remaining friends. She worked solo at New York clubs, and in 1944 CBS gave Bailey her own network radio show.

Large in size, Bailey was a victim of destructive compulsive behavior—particularly when it came to food and shopping. She suffered from diabetes and was hospitalized multiple times. Bailey's excessive spending and an inability to manage her income and savings caused her strain. Crosby came to her financial rescue several times, especially in her last years. Bailey retired in 1949 and died of heart failure in 1951. She was 44.

Sadly, Bailey was forgotten in the 1940s as music styles shifted, her look was less and less photogenic, and her voice became a relic of the Depression. It should be noted that her hit singles were all in the late 1930s. Yet Bailey remained a favorite of singers who encountered her at Hollywood and New York clubs. Re-listening to her recordings now, her voice is remarkably contemporary for its time—a gentle, swinging marvel that relaxed listeners as if she had been singing lullabies. Every singer today should study her style and phrasing. JazzWax tracks: Bailey's Columbia recordings were gathered on The Complete Columbia Recordings of Mildred Bailey on Mosaic in 2000. The box is out of print now. The extensive biographical and discographical liner notes by Will Friedwald that accompanied the box are exceptional.

Bonus: Here's Bing Crosby introducing Bailey on what would be one of her final performances, singing Georgia on the radio in 1950...