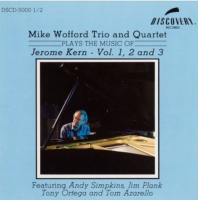 slideshow
Sometimes you must give an artist time to reveal himself. That's certainly the case with pianist Mike Wofford, who has been recording jazz since 1962, starting with The Shorty Rogers Quintet With Guest Vocalist Jeri Southern. Over the 18 years that followed, Wofford accompanied Larry Bunker (Live at Shelly's Manne-Hole), Joe Pass (Joy Spring), Shelly Manne (Jazz Gunn, Perk Up, Daktari and many others), Howard Roberts (Antelope Freeway and others), Oliver Nelson (Skull Session, Stolen Moments), Bobby Shew (Debut), Sam Most (Flute Talk), Sarah Vaughan on multiple albums, and recorded many others. There also were a handful of leadership albums along the way. But the highlight of his early career were three albums for Discovery devoted to the compositions of Jerome Kern.

Kern (above) was an interesting choice for Wofford. Often considered the first modern composer, Kern died in 1945, just as World War II ended. Remarkably, Kern's melodies were composed with a modern jazz feel and sophistication that made them sound decades ahead of their time. Songs like I'm Old Fashioned and The Folks Who Live on the Hill still feel contemporary despite the fact that Kern never lived in the post-war era He wrote more than 700 songs used in over 100 Broadway shows, and was a favorite of many top pop songbook singers in the 1950s, including Tony Bennett and David Allyn.

What's most interesting about Wofford's three Kern albums is that each can be evaluated separately or they can be considered chapters by the same author with three different moods. Wofford's treatment on each is a singular expression.

The first volume includes The Song Is You, Remind Me, I'm Old Fashoned, In Love in Vain and Nobody Else But Me among others. It's a gentle ride, giving the listener a chance to hear Wofford's rich, swinging feel without too many twists and turns. Simpkins and Plank are strong players but never get in Wofford's way. On bass, Simpkins has the mighty, woody string snap of Paul Chambers while drummer Plank clearly has an appreciation for Vernel Fournier given his sandy touch with the brushes.

The second volume features more textured and expressive interpretations of Kern's compositions. The songs include Why Was I born, Smoke Gets in Your Eyes, All the Things You Are and You Are Love. With Anthony Ortega aboard, songs are dipped delicately in abstraction. Tony's reed explorations and free-jazz edge are neatly polished by Wofford's lush chord voicings and cooled by Plank's vibes. All three play off each other well.

The third volume features songs such as Long Ago and Far Away, The Folks Who Live on the Hill, I Won't Dance and All in Fun. The trio this time around is more tempestuous and experimental with Kern's familiar melodies.

Which is why I recommend you listen to all three albums sequentially, so you can take in Wofford's evolution as he weaves through the Kern catalogue. Think of the experience as three-course meal. Wofford is that exciting and sensitive.

JazzWax notes: To read my 2012 interview with Anthony Ortega, go here. Remember, the link takes you to Part 1. For subsequent parts, look for the link above the red date at the top of each post.

For an oral history by Mike Wofford, go here...