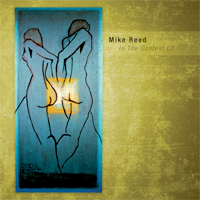 AVON, CT -- Drummer Mike Reed joins forces with three fellow mainstays of the Chicago improvised music scene, Jim Baker (ARP synthesizer), Nicole Mitchell (flute) and Jeff Parker (guitar), for his first release under his own name, In The Context Of (482-1047), coming March 14th on 482 Music. This collection of eight improvised duets finds Reed performing with Parker on two tracks and Baker and Mitchell on three tracks each. Reed has worked extensively with all three players around Chicago in a variety of improvised configurations as well as in long-standing groups such as The David Boykin Expanse.

“In the fall of 2003 I was asked if I had any interest in making a solo drum recording," writes Reed in the liner notes. “Although a flattering idea, I declined. The nature of any music that I have participated in has been that of a relationship and dialogue with other musicians. My ideas and ideals as a musician, no matter how out front or supportive, have always stemmed from performing In The Context Of an ensemble. Presented here is the barest display of that context, a series of duets with some of my favorite musicians. I'm truly blessed to have the opportunity to listen and interact with these unique people on and off the stage."

Reed has been an active member of the vibrant Chicago jazz and improvised music community since 1997, working prolifically as both a drummer and an organizer/ presenter of live music. He has performed regularly with Axel Doerner, Josh Abrams, and Tobias Delius among many others and is currently a member of The David Boykin Expanse, Rob Mazurek's Exploding Star Orchestra and the Josh Berman Quartet. As a leader, he has released two recordings with his cross-genre group The Treehouse Project, including 2002's three-disc set The Picture Show (482 Music), and his quintet, Loose Assembly, expects to release its debut later this year. Reed is also the founder of the Emerging Artists Organization, considered one of the finest not-for-profit improvised music series in the Midwest, and his work as the lead organizer of July 2005's Intonation Music Festival, in coordination with Pitchfork Media, led the Chicago Tribune to call him one of the Chicagoans of the Year.