The musicians bring traditional jazz aplomb and an intrepid sense of musicianship to each of their efforts on the new album, and the results prove both accessible and surprising.
—WXPN's the Key 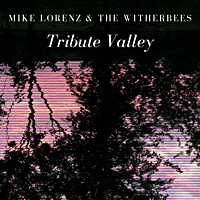 slideshow
The Philadelphia area folk-jazz band, Mike Lorenz & the Witherbees, is the newest creation of guitarist/composer/bandleader Mike Lorenz. Having released their first LP of new original music and folksy covers in the summer of 2019 to positive reviews, the group continues to write and arrange new material to develop their sound and reach. With the digital EP Tribute Valley, the band celebrates its penchant for covering songs they love, deconstructing them, and putting them back together. This newest release by Lorenz and his jazz-folk dreamband will be available on all streaming platforms March 13th, 2020.

“When the Stars Go Blue,” is an oft-covered Ryan Adams song. The Witherbees shine where many recordings fail, reaching a level of vulnerability, range, and intimacy that is unparalleled. The group originally released this song in March of 2019 as a charity single. Jacqui Armbruster’s vocals especially shine on this song, mingling closely with the shimmer of Lorenz’s guitar and the earthy support of Justin Sekelewski’s bass.

Live sets by the Witherbees feature a playful dialogue that has yet to be featured on record, often on lost riffs of '70s jazz fusion. The Yusef Lateef vehicle “Nubian Lady” is a prime playground for the conversation that happens in any live set. Again exploring otherwise ignored '70s jazz hits with contemporary panache and earnestness, this track is like being transported to the front row of any gig, where guitar and viola merge in loopy wistfulness.

“Sadness Don’t Own Me,” a song by the group the Staves, is another chance for Armbruster and the band to flex their dynamic range and willingness to let a song float. Through many performances of this song, the ‘bees have found new territories of quiet and loud that were otherwise unchartered up until that moment. Through some studio magic, Lorenz is playing both electric and acoustic guitar on this track, in conversation with himself, attentively supporting Armbruster’s vocals. The build-up is like a post-rock crescendo with restraint.

Rounding out the EP are two tracks that seem to have no relation but somehow connect in Lorenz’s curatorial brain. “April Kisses” is a classic guitar piece by legendary jazz guitarist Eddie Lang. The inspiration for this rendition is a not-so-subtle nod to Bill Frisell’s album Have a Little Faith, which features a similarly raucous and fuzzed-out arrangement of John Philip Sousa’s “Washington Post March.” The idea to cover this specific song came from hearing guitarist Nels Cline perform it in June 2018 at a one- off concert exploring the rich musical history of Philadelphia. Nels is obviously an influence over the last selection on the EP, Side with the Seeds. This Wilco track has been a “fan favorite” of the band’s live sets and is here seeing the light of day for repeat listens and shred sessions.

Mike Lorenz & the Witherbees plan to release a follow up full-length album of (mostly!) original material by the end of 2020.