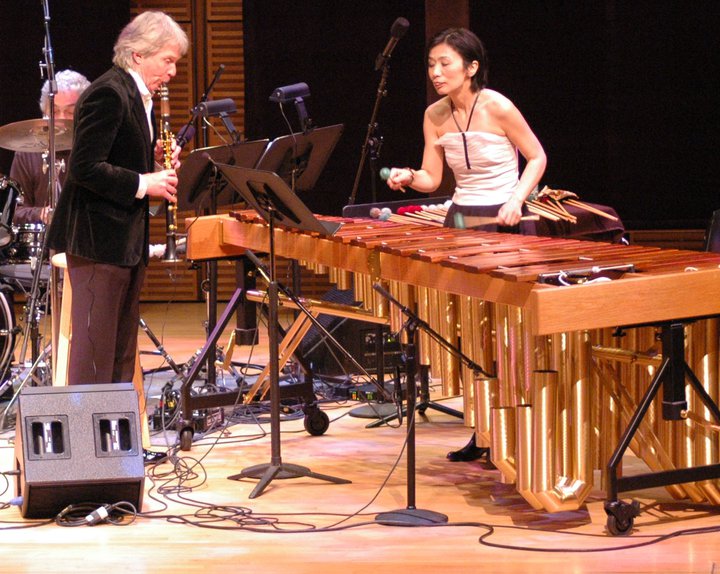 Yoshida has been described as “a flame dancing before her instrument" (New York City Concert Review), who recently celebrated sold-out recitals throughout the Blue Note Jazz clubs in Japan with her group, MIKARIMBA, featuring Steve Gadd, Eddie Gomez and Stefan Karlsson. Richard Stoltzman is arguably the world's best-known clarinetist, who has both helped to broaden the repertory for classical clarinet and made numerous forays into jazz, Latin and crossover styles. Over a long career, he has accomplished a number of firsts for his instrument, becoming the first wind player to receive the prestigious Avery Fisher Prize, and the first clarinetist to give solo recitals in Carnegie Hall and at the Hollywood Bowl. He has appeared with orchestras and chamber groups around the world, performed with pop artists like Mel Torme and Judy Collins, and won two Grammy Awards. The two premiered their project BACK + MONK in January 2012 at New York City's DROM, to sold out audiences.

Born in Amakusa Island, Kumamoto, Japan, Yoshida now resides in New York City. Since studying at the University of Toronto, Yoshida has devoted herself to marimba performance and musical studies under the strong influence of the NEXUS. She is also studying jazz privately with jazz vibe master, Mike Mainieri, in New York.

This August, 2011, Yoshida celebrated sold-out recitals throughout the Blue Note Jazz clubs throughout Japan with her group, MIKARIMBA, featuring Yoshida on marimba, the legendary Steve Gadd on drums, Eddie Gomez on bass and the formidable pianist Stefan Karlsson.

Two-time Grammy Award winning clarinetist Richard Stoltzman's virtuosity, technique, imagination, and communicative power have revolutionized the world of clarinet playing, opening up possibilities for the instrument that no one could have predicted. He was responsible for bringing the clarinet to the forefront as a solo instrument, and is still the world's foremost clarinetist.

Stoltzman gave the first clarinet recitals in the histories of both the Hollywood Bowl and Carnegie Hall, and, in 1986, became the first wind player to be awarded the Avery Fisher Prize. As one of today's most sought-after artists, Stoltzman has been a soloist with more than a hundred orchestras as well as a recitalist and chamber music performer, innovative jazz artist, and prolific recording artist. A two-time Grammy Award winner, he has amazed critics and audiences alike in repertory spanning many musical genres.

Stoltzman graduated from Ohio State University with a double major in music and mathematics. He earned his Master of Music degree at Yale University while studying with Keith Wilson, and later studied with Kalmen Opperman at Columbia University. He makes his home in Massachusetts and is a passionate Boston Red Sox fan. He is also a Cordon Bleu-trained pastry chef whose specialty is the Linzer Torte.